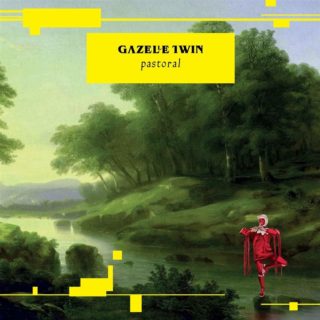 From the opening moments of ‘Folly’ right through to the final bars of ‘Over The Hills’, ‘Pastoral’, the new album from Elizabeth Bernholz’ monstrous alter-ego Gazelle Twin, is an abrasive and deeply unsettling listen. The album was conceived as a reckoning on England’s “gentile” nationalism of village fetes and private schools, employing harsh electronics and bristling vocals to expose the hellish danger she sees lurking beneath it all.

On its cover and throughout its promotional materials Bernholz appears in a new guise as a Morris dancer come football hooligan, a manic grin serving as a stand in for the traditional stiff upper lip. Sampling football chants and featuring Bernholz’s own twisted rendition of ‘Jerusalem’, ‘Pastoral’ sounds like the last three hundred years of English history shoved into a broken sampler and kicked down the stairs of St Paul’s.

‘Better In My Day’ and ‘Little Lamb’ are the record’s clearest statement. A pair of relentless rave-ready tracks, the former balances elderly bitching and manic recorder playing in a way that has probably never been done before and certainly never as well.

The darkness of the album is inescapable and in places oppressive, such as on the howling breakdown of ‘Glory’. However, for every burst of noise or gothic wail there’s a hook of equal potency. Lead single ‘Hobby Horse’ is sung through gnashing teeth and features Bernholz telling the listener to “get out of here” over a beat like pounding hooves. Somehow you still come away with the chorus stuck in your head.