Beauty in the barrage

It feels appropriate that Gazelle Twin’s final UK show of the Pastoral album cycle should take place at the end of a week in which British parliament has been prorogued by its most chaotic government in recent history. Pastoral is, after all, a record that speaks eloquently to the reactionary pathogens that afflict contemporary British politics; as the Johnson cabal clings desperately to power by any means necessary, cloaking its xenophobia and self-entitlement in precisely the kind of middle English, know-your-place bluster that Gazelle Twin’s music so expertly dissects, witnessing Elizabeth Bernholz in full mischievous flow is a cathartic experience.

Tonight’s show, part of Kirsteen McNish and Luke Turner’s People’s Forest season for Waltham Forest Borough of Culture 2019, is every bit as subversive, unsettling, frequently abrasive and occasionally gorgeous as the album on which it is built. Against a backdrop of the Constable-esque, Arcadian scene from the LP cover, Bernholz bounds onstage as the Jester; to borrow a phrase from Ben Hewitt’s interview with her for L&Q, she looks like “a creature from Pan’s Labyrinth that’s gone on a trolley dash in Sports Direct”. With Natalie Sharp (aka Lone Taxidermist) taking care of the instrumentals, the Jester is free to dervish around the stage wildly, a manic grin the only visible part of her body from beneath her lurid red costume.

The pair waste little time, barrelling through the bulk of Pastoral without pausing for breath. The opening one-two of ‘Folly’ and ‘Better In My Day’ sets the tone, confrontational and uncompromised, while the barbed synths and metallic rhythms of tracks like ‘Old Thorn’ and ‘Dieu Et Mon Droit’ seem to stretch and warp the very fabric of this small room in Walthamstow. By the time the counter-intuitively anthemic ‘Hobby Horse’ comes around, I’m knackered. It’s pretty overwhelming.

The closing flourish tonight, though, is the jewel in this particularly thorny crown, as Sharp joins Bernholz to sing an unexpected and utterly stunning reimagining of Ivor Cutler’s ‘Women of the World Take Over’. Bernholz’s voice has been astonishing already tonight, her ability to veer from devilish sneer to quasi-operatic melodrama potent and unique, but this pairing with Sharp’s lower, more intimate tones is downright transcendent. With little more than their dual vocal, tasteful reverb and modulation, and the occasional hoot from the Jester’s recorder, they build something otherworldly in this corner of North East London. Like ‘Over The Hills’, the closing track on Pastoral, it’s a moment of spare, unadulterated beauty in which to take solace following the preceding barrage. This of all weeks, that feels rather fitting. 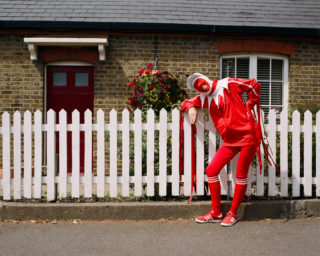 End of the Road festival 2019 just got bigger, scarier and weirder