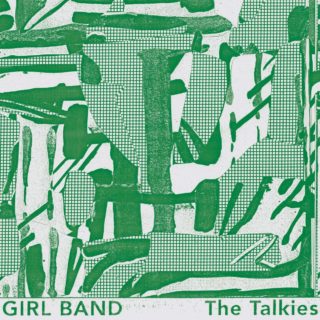 The Talkies opens on a panic attack. All laboured breathing set to a looming, claustrophobic drone, it sets an unsettling tone but one that feels intentional after a disjointed few years of cancelled shows and singer Dara Kiely’s open issues with mental health. It’s a 110-second distillation that says nothing but kind of everything about Girl Band’s journey to date; Kiely’s fierce presence is a significant part of what makes them so enthralling but it’s not the defining factor because here The Talkies is about looking forward.

So, while they kicked and clattered their way through discordant debut Holding Hands with Jamie in 2015, this follow-up swims deeper into a sound and fury you feel only emanates from the basements of Russian delicatessens and the brutality behind heavy metal doors.

‘Shoulderblades’ takes the bulging adrenalin of The pAperchAse and collides it with clanging, industrialism and walls of layered, ambient reverb to create something that’s both manic and essential, ‘Couch Combover’ hits with equal heft as Kiely’s ferocious vocal contorts over mangled guitars, and ‘Salmon of Knowledge’ writhes with dissonant, pulsing electronics that throb to the surface in the album’s brief moments for pause.

Recorded in a stately home, The Talkies became an expression of the house itself with the drums captured twice (once on the landing and once in the cellar) to provide options in the mix. It’s an approach that comes to life on ‘Aibohphobia’ as the percussion rattles and echoes around empty space and static and a haunted, drawling Kiely sounds like he’s clawing his way through the walls.

Things are similarly vivid on the cataclysmic air raid siren of ‘Akineton’, which is less of a warning klaxon and more the instant realisation you’re deep into a sub-2-minute frenzy of scattergun noise and disorientation while ‘Amygdala’ is equally as brief as Kiely mumbles and howls in garbled tongues over simpler, stripped-back guitar.

The Talkies hits you with vacillating confrontation, panic and anxiety but there’s more in play than pure, thumping menace and the ugliness of it all. From the intensity of opener ‘Prolix’ to the exhale of ‘Ereignis’, there’s a clear trajectory, and while Girl Band don’t exactly find peace, they excel here in this erratic calm.