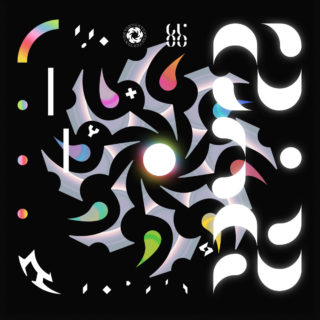 Mamu is a world entirely of Iglooghost’s own creation, comprising two swimming pools (one square, one circular), a bomb, a cup of tea and two cartoon eyeballs. We entered it on his debut EP, Chinese Nü Year. Our protagonist was Xiāngjiāo, a time-travelling blue worm in a warlock’s hat, hurtling through a maximalist utopia soundscaping his own ADHD in a chipmunk’s-stolen-your-modular-synth kind of way. In the four years since, Xiāngjiāo’s morphed into a witch (Neō Wax Bloom), has made the occasional live appearance in full cosplay majesty, and Iglooghost’s rapid solo ascent continues to be a brilliantly inexplicable glitch in even the most experimental cosmos.

It’s only natural that the universe is expanding – there’s no obvious route back from a Dorset bedroom producing the kind of mad make-believe intricacies that renders J.R.R. Tolkien undercooked. The existence of this project has been teased for a while from the mouth of one child prodigy to the next. Joined by the wonky frenzy of Big Dada’s Kai Whiston (of Kai Whiston Bitch) and Margate’s BABii (whose own excellent three month-old debut has barely had time to stretch its legs), Iglooghost co-founds GLOO: an appellation – we found out in last month’s Loud And Quiet – that is as willingly here for sponsoring wrestling competitions and building/selling furniture as it is for the combined musical output of three electronic artists.

But forgetting chairs and tables for a minute, XYZ has magically appeared as the collective’s first outing. It’s as varied and completely nuts as you’d expect.

‘Barely Twins’ features some of the biggest bass lines you’ll hear from any of Kai’s heaviest dnb, but ‘C Thru’ is a voracious slow-jam, subdued and sickly sweet. The Alberto Balsam sample on ‘Teef Chizzel’ plays through like a knuckleduster on the non-existent hands of a new spirit that you’re terrified of, but as one sample’s there to beat your door down, the splintering chaos of ‘Lux 2’ gets a giggle (it’s an extended inside joke sampling Hudson Mohawke and Lunice’s TNGHT project as a quasi-diss track). Converse to everything before it, album closer ‘Lamb’ is then flecked by so much melodic R&B that it’s only BABii’s voice (again) reminding you exactly what universe it is that you’re exiting.

Forget all territorial politics, the only thing we can definitely say from XYZ is that GLOO will be the first to win the space race. We likely won’t know what world we are in until the album notes and commentary follows, or quite what’s happened to the witch-worm. Trying to unpick the madness is as redundant as not buying into it in the first place. This is the year’s most brilliantly alienating album. I’ll give it an eight.