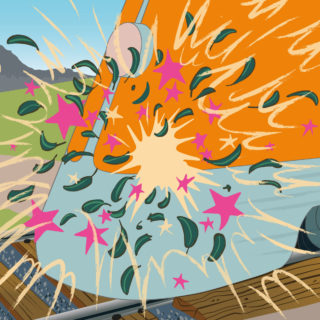 For me, few phrases in popular music invite apprehension quite like “double album”. Negative connotations include over-indulgence masked as auteurism, a super-deluxe price point, the baffling insistence that everything from your recording session is absolutely, definitely worth the wax. Doesn’t it make sense for any half-decent release to have felt the sting of an editor’s scalpel somewhere along the way? No such trimming — or perhaps, certainly not enough — occurred on Mellon Collie and the Infinite Sadness or Drukqs. Even The White Album had ‘Ob-La-Di, Ob-La-Da’. As the one-hour-plus mark drew closer, didn’t the internal voice ever say, woah now, rein in it?

Hey Colossus’ thirteenth album, Dances / Curses, released on bassist Joe Thompson’s new Wrong Speed Records imprint, is a double album, and while it doesn’t contain anything as superfluous as the worst Beatles song, it occasionally feels more unwieldy for its heavier veer towards chugging dirge rock. As fine as ‘Dreamer Is Lying In State’, ‘Nine is Nine’ and ‘Dead Songs For Dead Sires’ are, it’d be difficult to pick them out of a line-up. In other cases, we’ve literally heard some of this stuff before. ‘Medal’ is repurposed from a 2019 7”, and probably could’ve been left there were it not another shining example of the sextet’s cunning sense of humour, jibing at the lie of meritocracy in this nation on the blink, and indeed within their own storied legacy: “You want a medal, medal, medal,” bludgeons Paul Sykes’ refrain.

But behind every double album stands a great 10-to-11 song tracklist, and Dances/Curses is worth exploring for the fact. ‘The Mirror’, which features a spoken word appearance from Mark Lanegan, is so weighty, so redolent of Slint’s pendulous menace that it can’t help but seem like a shame we don’t have an entire collaborative album. The link isn’t accidental either; like Lanegan, Hey Colossus have always skirted the edges of metal, less interested in riffs than invoking deep, heavy psychedelia. To this end, ‘The Eyeball Dance’ opens up the album with a steady build of stomping one-note punctuations, further stretching to epic proportions on the 16-minute centrepiece ‘A Trembling Rose’. Hypnotic states are masterfully broken by snappy chorus rushes, such as those on ‘Donkey Jaw’, making any rhythmic shift feel seismic and exhilarating. Sykes’ lyrical occupations still linger on esoteric Britishisms, perverting nursery rhymes — chief among them ‘1, 2, 3, 4, 5, Once I Caught A Fish Alive’ on ‘Dreamer Is Lying In State’ — and common idioms into narratives of surreal isolation, which certainly gives IDLES a run for their money.

Largely due to its bloat, Dances / Curses isn’t perfect. Then again, Hey Colossus struck gold with The Guillotine, and rarely can a group strike gold twice. But that was three years ago, and credit to them, they’re not resting their laurels in the glorious past.