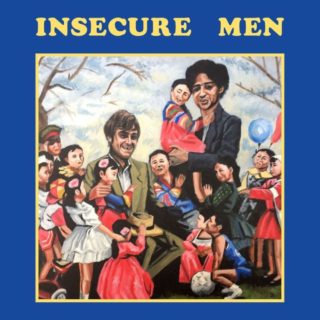 The creative duo at the core of Insecure Men are Fat White Family’s Saul Adamczewski and Ben Romans-Hopcroft of Childhood.

The back story to this debut record is interesting; after wilfully feeding himself through the hard drugs mincer during FWF’s rise to prominence, Adamczewski put himself back together in rehab, and his resulting clean-living approach gave birth to this “wholesome” collection of pop songs. And in comparison to his other band, the sound of Insecure Men certainly is wholesome – floaty, warmly absorbing and, frankly, easy on the ear.

‘Teenage Toy’ could have been written by ‘Parklife’-era Damon Albarn, while ‘All Women Love Me’ is sweeping lounge-pop; processional and brassy, layered with lap steel guitar. There are hints of Air, Eels and Spiritualized throughout.

However, it’s not all a post-narcotic awakening. Remember, this is Saul Adamczewski. There are songs about Operation Yew Tree, Jerry Adams and Gary Glitter. ‘Mekong Glitter’, for example, might be an upbeat slice of glam rock, but its lyrics are very dark; ditto the death-themed ‘Whitney Houston And I’, which features a children’s choir. There’s another one called ‘Cliff Has Left The Building’, and you probably don’t need any clues about who that’s about.

An odd mix then: a sing-a-long pop album that explores some grim fascinations. Sounds like Adamczewski is feeling himself again.