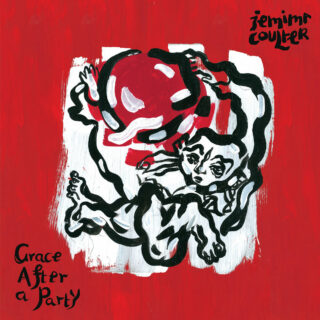 On ‘SST’, the opening track on Grace After a Party, Hampshire-raised, Bristol-based artist Jemima Coulter wastes no time in demonstrating how ambitious their songwriting is. Starting with just their voice and a gently-picked guitar, the track swells into an all-encompassing, richly textured wave of melody and grungey alt-rock riffs. “It’s lucid, these stories, they’re stories, no ending,” they sing, the first of the record’s meditations on temporality and transience.

Coulter lists Westerman, Arthur Russell and Justin Vernon as key influences, and Grace… contains plenty of the angst and earnestness these artists do best. It seems Vernon in particular has had a profound impact on Coulter’s songwriting – on some tracks (‘Piano 1’, ‘Peeling – Heaven’) their phrasing, and the heavily layered, electronically obscured vocals are so reminiscent of Bon Iver’s 22, A Million that they verge on derivative. On the whole though, Coulter has taken the musical vocabulary which Vernon (and others) have  established and retold their own stories with it.

On ‘Dancing With Lara’ and ‘[horses]’ Coulter comes closest to their own distinct identity. The former, the first single from this album campaign, sees the artist spontaneously following a lover to Marseille only to end up wandering the city streets while they work as a dancer, listening to Henry Miller’s The Smile At The End of The Ladder on audiobook and contemplating whether or not they were too bold in their romantic gesture. It’s an experience that colours the whole record, and there are hints to Miller’s clown protagonist in other tracks (‘SST’) But it’s on ‘Dancing With Lara’ that the emotion in Coulter’s voice resonates most despite being distorted, when in the track’s climax, they decide to head back to Bristol, determined to focus on their own work. “I feel like myself again,” they cry, in a moment of palpable catharsis. If this is the sound of an artist just getting to know themselves, what comes next is bound to be even more accomplished.