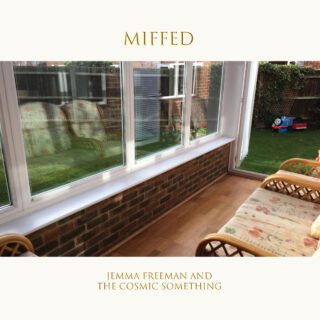 On their second full-length album, Miffed, Jemma Freeman and the Cosmic Something drive further down into the eccentric, day-glo psych-punk of their debut, once again taking a maximalist approach to form and genre to create a record of searing, Led Zeppelin-like force. There’s little in the way of restraint on Miffed, but that’s the point: the solos are wild, the riffs joyously unencumbered, Freeman’s siren vocals corkscrewing around enormous hooks with liberatory conviction. Lyrical zingers like “You’re not controversial, you’re just a cunt” are pleasingly on-the-nose, the kind of lines which only work when belted out by a singer who really, audibly, defiantly means it. Luckily, that’s exactly the kind of artist Freeman is.

The ultra-sturdy rhythm section allows Freeman to pursue their idiosyncrasies without having to worry about the fundamentals of each track becoming lost in the squall; songs like ‘Huge’ and ‘Easy Peeler’ could spin out into the ether without such an anchor, but instead they strike an admirable balance between freneticism and control. This dialectic of escapism and reality is central to Miffed: as much as it’s an exercise in mischievous, galactic-scale ambition, it’s most vitally an expression of the trauma, rage and occasional bleak hilarity Freeman experiences on a daily basis as a queer, neurodivergent person in the hostile environment of contemporary Britain. It makes sense that this kind of escapist joy is all the sweeter for its solid connection to the material facts from which it’s cartwheeling away.

Jemma Freeman and the Cosmic Something