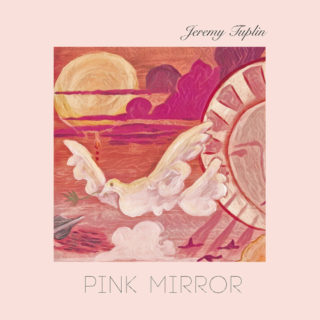 It wasn’t only the ‘Space Oddity’-era Bowie references in ‘I Dreamt I Was An Astronaut’ that dubbed Jeremy Tuplin’s debut an acclaimed exploration of intergalactic space-folk. In the music videos you could see him floating around the atmosphere as a papier-mâché potato loosely resembling his own planet. With ‘Pink Mirror’ the surreal, conversational baritone of his first effort returns as sharply and as rigorously syllabic as before, but goes easy on the zero gravity and pulls you back to earth one innocuous conversation at a time.

The blissful opening track ‘Can We Be Strangers’ sounds like a Dessner-produced standard, a dreamlike stumble disillusioned with reality and protracted until Tuplin’s usually centre-stage vocal is completely drowned. On the flipside, the irresistibly catchy ‘Bad Lover’ and ‘Pink Mirror’ fires through Robert Quine-like guitar hooks tinted with astute sarcasm and infectious doo-wop harmonies. ‘Love’s Penitentiary’ is the jealous man’s equivalent of Leonard Cohen’s ‘Tower of Song’, before album highlight ‘The Beast’ narrates a slow plodding detox through shit-filled country fields (the singer having read online that walking barefoot transfers electrons into your body and has health benefits).

‘Pink Mirror’ plays as an autobiographical sitcom; Tuplin the silently comedic protagonist. He’ll be doing an Elvis impression on ‘The Machine’, or talking about his dreams in ‘Pandora’s Box’ despite acknowledging and rejecting the collective inner groans. Each time you think you’re listening to Bill Callahan’s enlightenment, you’re dealt a line that could have come straight out of Flight of the Conchords. The craftsmanship is self-effacingly brilliant. He’s folk music’s Jimothy Lacoste, posing for a photo in front of your bright pink vintage car, doing that ‘cool-musician-dance’ famed by Donny Tourette on Buzzcocks. But it won’t be long before you’re caught off-guard and dealt some of the year’s most poignant song-writing.