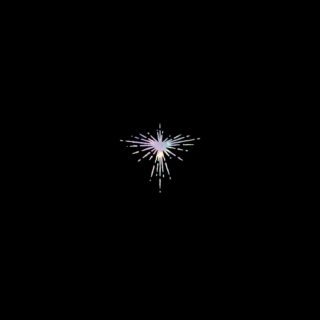 There’s a long, varied history of musical odd couples. Some were surprising (Jay-Z and Linkin Park won a Grammy for the not wholly offensive ‘Numb/Encore’), some were inexplicable (see Sting’s and Shaggy’s 2018 collaboration on a mid-life crisis) and some will always remain unforgiveable (take a bow Brian May and Dappy). But with lines blurring and genres increasingly mashed together in a desperate major label scrabble for crossover appeal, there’ll always be a string of strange bedfellows, disastrous duos and car-crash collaborations. But then, sometimes, it all makes perfect, unlikely sense.

Towards the tail end of last year, Danger Mouse and Karen O emerged with ‘Lux Prima’ – the title track of this album – and, with it, the announcement of their collaboration. In the six years since Yeah Yeah Yeahs’ last record, Karen O has appeared on the odd single, made a handful of guest appearances and featured heavily on the Danielle Luppi/Parquet Courts album ‘Milano’. By most standards it hasn’t been an unproductive interlude, but for the force of nature that helped define the compelling renaissance of guitar music in the early 2000s, there’s always been the sense that this wasn’t the long-term plan; that there was something more to come beyond fleeting cameos on other artists’ tracks.

For Danger Mouse the optics are a little different, with Brian Joseph Burton lending his production skills to a kaleidoscopic rolodex of Beck, The Black Keys, U2, A$AP Rocky, Adele, Iggy Pop and Red Hot Chili Peppers over the last decade. But away from the dials it’s been nine years since we’ve heard a peep from Gnarls Barkley (despite talk of work on a third album in 2017), and five years since Danger Mouse’s name was up in lights alongside The Shins’ James Mercer as one half of Broken Bells.

Based on that, there’s little to suggest that either Danger Mouse or Karen O’s divergent paths would cross, with one the whirling art-rock darling and the other largely known as the producer who initially soundclashed his way into the spotlight off the back of Jay-Z and The Beatles – and a lot of craft, time and patience, obviously. On the face of it, their partnership and, by default, ‘Lux Prima’, seemed to come out of nowhere. According to Danger Mouse, this wasn’t the case. “Karen and I had been plotting on working together for a long time,” he says. “And with no discussions on what the music would eventually sound like, we jumped in.”

“Danger Mouse and I wrote this music purely out of artistic exploration and the spirit of collaboration,” says Karen O. “It’s the first music I’ve written since the rite of passage of bringing a life into the world. Having a kid was like communing with the grander scheme of nature, the cycles of life, the transformative power of the mother. These themes felt timeless yet more topical than ever in the modern world, so cut off and abstracted from its origins.” The sweet spot, then, seemed fairly obvious: Karen’s I-don’t-give-a-fuck attitude feeding off of Burton’s chameleonic ear for a high-energy blend of pop, rock and hip-hop production. What we have instead is arguably some of the most accomplished work of their careers to date.

At its core, ‘Lux Prima’ is all about balance – specifically the way Danger Mouse’s gilded production soothes the force and feistiness of Karen O. But where Danger Mouse offset Mercer’s distinctive, melodic vocal for Broken Bells with a clattering, lo-fi production, here he’s taken a cinematic high ground, with an emphasis on creating something intentionally widescreen (ambiguous, almost) that’s allowed Karen’s vocals to adapt and flourish.

There’s still elements of boom-bap simplicity, but here Karen O feels in charge as she sets the tone and narrative with the control and arresting fragility that made ‘Maps’ feel so honest and exposed. And it makes for a considered, delicate, often lavish listen that’s established from the outset.

“With ‘Lux Prima’ we were really looking for a place rather than a sound,” Danger Mouse says. “It was our first shared destination, so we thought we’d take our time getting there. The song itself is a bit of a journey, but all the parts felt like they needed each other.”

The title-track in question is a 9-minute opus; an evolving mini-score in and of itself that pulls in rich, warm bass lines, strings, xylophone and an orchestral repertoire as Karen’s vocal weaves down around her huskier octaves. It’s a classy demonstration of how Burton’s prolonged time behind the production dials has manifested itself as a Danger Mouse main event. Here, and throughout the album, his touch is regal and refined – similar, in shades, to his work with Broken Bells – but infinitely more measured and consistent. And yet, despite the long glittering list of production credits and collaborations he’s racked up, this album feels like a point of context; the point where Danger Mouse can be held up with a different kind of deference because if Mercer and Broken Bells were the testing ground, ‘Lux Prima’ is the realisation of that craft.

“After making music for the past twenty years and embarking on making this record with Danger Mouse, I knew a couple things: one was that the spirit of collaboration between us was going to be a pure one, and two was that the more I live the less is clear to me. When you create from a blurry place you can go places further than you’ve ever been. I think we both were excited to go far out,” Karen explains.

It’s a concept both she and Danger Mouse reference when they talk about the genesis of the collaboration and the idea of ‘Lux Prima’ being a shared journey to anywhere – no borders, no boundaries, no expectations. More creative intent than wild experiment, their starting point may have been undetermined, but as they’ve worked through to define the blur, the album feels exploratory for both artists without losing the threads to keep it all connected.
That willful exploration gives ‘Ministry’ its wistful depth, ‘Turn The Light’ its glitter-pop melancholy, and ‘Redeemer’ its perky, synth energy. And while collectively it’s a showcase of Danger Mouse’s impressive versatility, on each track, and throughout the album, Karen’s ability to reprise personas from breathless temptress to zealous protestor, pop diva to broken-hearted songstress, is a consistently compelling feature.

On ‘Drown’, she’s distant and imploring, her voice drifting and swimming through the dead space, warm bass reverberations and a string and xylophone dynamics that anchors much of the album’s sound. On ‘Leopard’s Tongue’, she’s on a casino stage, red velvet curtains in the background, the spotlight never leaving her mark. On ‘Reverie’, she’s inside Tarantino’s head, soundtracking the Kill Bill wedding chapel scene, her voice regretful, carrying the weight of each lone guitar strum.

But it’s on ‘Woman’ where we get more than a flicker of the smeared-lipstick, ripped fishnets Karen O, the frontwoman unleashed with high-pitched vocals, ardent energy and sense of release. It’s not as sustained as feverish Yeah Yeah Yeahs glory days, but it still delivers a flash of the knee-trembling falsetto intensity in the context of her beautifully disciplined performances elsewhere on the album.

“‘Woman’ came like a bolt out of the blue when we were in the studio,” she explains. “We did a first pass where I was blurting unintelligible words and Danger Mouse and I were like ‘Dang! That was intense. What’s that word I keep saying? Woman.’ The atmosphere was volatile with it being just after the election and a lot of people felt helpless like you do when you’re a scared kid looking for assurance that everything is gonna be alright. I like to write songs that anyone can relate to but this one felt especially for the inner child in me that needed the bullies out there to know you don’t fuck with me. I’m a woman now and I’ll protect that inner girl in me from hell and high water.”

The end result is an album that feels storied, complex and, crucially, intentional. For Danger Mouse, it’s another proof point after his work with Sparklehorse and James Mercer; for Karen O, it’s a brilliant reminder of just how essential she is. As odd music couples go, this one makes more sense with every listen. 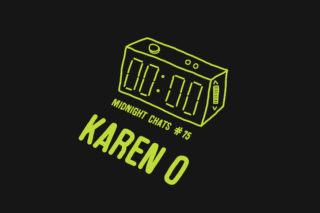 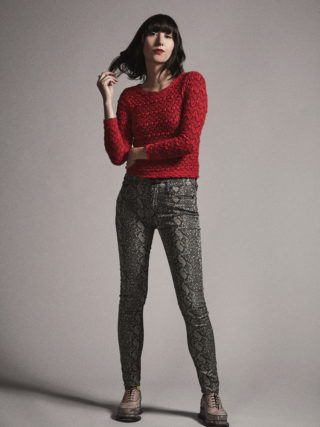 They Don’t Love You Like I Love You: Karen O, crushing hard