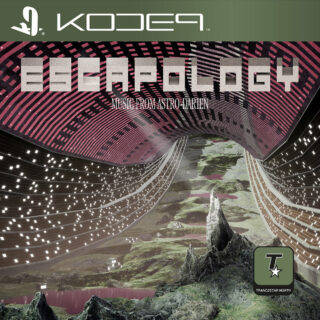 It’s 30 degrees in London as the new Kode9 album tumbles from my speakers, as dense, pungent and disorientating as the treacly air outside. With every available window as wide open as possible, the thrum of the city is never entirely drowned out by the record itself, instead providing a scratchy, fume-heavy frame for the album’s restless soundscape. It’s probably not the optimum sonic hygiene for a critical listening experience, but it feels oddly appropriate; this is not music to be experienced in individuated, vacuum-packed isolation.

Few music industry figures have been so closely engaged with the dynamism and fluidity of contemporary urban life than Steve Goodman over the past two decades. As well as producing exceptionally explorative club music as Kode9, Goodman is also the head of Hyperdub, a label whose notoriety belies its cerebral, underground roots and is responsible for releasing vital work from the likes of Burial, The Spaceape, Ikonika and Loraine James. For a London listenership in particular, Hyperdub’s significance is hard to overstate; the procession of grime, jungle, dubstep, footwork and garage subversions that makes up the label’s catalogue is remarkably attuned to the anxiety, violence and occasional intimacy of this complicated, unforgiving city. It’s also possible, and important, to highlight the link between the cultural power of Hyperdub’s output and the political and intellectual work of Goodman – and other artists associated with his roster – alongside the likes of Mark Fisher and the Warwick University-affiliated Cybernetic Culture Research Unit. This is a milieu that takes culture – radical and working-class culture in particular – very seriously indeed.

Yet for all the academic resonances of Kode9 and his various projects – the talk of hyperstition, accelerationism and psychogeography – the thing that has always been central to the best of his music, and indeed much of the most enduring Hyperdub output, has been the very physical feeling of sociality that courses through it. This is music you can feel, and that’s best experienced in the middle of a thronging dancefloor.

Kode9’s latest record (and first since 2015), Escapology, is no exception. A collage of overlapping rhythms and angle-grinder synths, its aesthetic dips into the outer reaches of Chicago footwork one minute before careering into UK hardcore the next, all the while stalked by a relentless undercurrent of bass that’s crying out to be punched into your chest by a ferocious soundsystem. That’s fortunate, really, considering that this album is just one part of an ongoing project called Astro Darien, a work of ‘sonic fiction’ that has also included a two-week audiovisual installation at Corsica Studios, home to some of London’s most brutal subs.

Divorced from the rest of the project, it does occasionally feel like Escapology is lacking a crucial accompaniment, but that’s probably fair enough – after all, it is. In its full form, Astro Darien is partly about an imagined off-world colony designed as a way of allowing pro-independence Scottish radicals to escape British unionism, and the flickers of newsreader-style vocal sampling that allude to this throughout the album offer a tantalising glimpse into the wider network of ideas which Goodman is playing around with here. Even without them, though, there’s still plenty to get out of Escapology in its own right, its shadowplay of divergent textures, scathing breakbeats and frequent dissonance providing an unsettlingly visceral experience; with nothing but the meagre assistance of a relatively humble domestic stereo system, it makes its listener sweat and fidget. But maybe that’s just the heat.