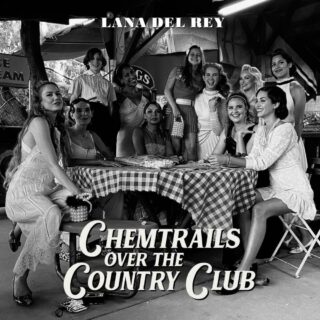 It’s been almost ten years since ‘Video Games’ made its first appearance on YouTube in October 2011. Ten years that saw Lana del Rey embody every facet of the American dream: the rising pop star, the lost girl, America’s sweetheart, the desperate other woman, and then a woman in love. She started out with hip hop-infused, noirish pop, to immediately turn to guitar indie-ish rock; she worked with the like of psych-Americana royalty Jonathan Wilson and duetted with the Weeknd; she discarded a complete album to start over on the same songs with Dan Auerbach. In any case, she kept singing about unrequited love, diamond-studded dreams, life on the road, and poetry. She rapped, and she sang with her mezzo-soprano voice; she covered ’50s standards and Nina Simone. She received every kind of criticism, from being accused of not being authentic enough – both physically and artistically – to glamourising abuse. Nonetheless, she kept making her music and following her path.

Chemtrails Over the Country Club is Del Rey’s seventh studio album, a “midwestern sounding” record, in her own words. Touched by Jack Antonoff’s Midas hand, it’s not difficult to hear traces of the work the producer recently made with Taylor Swift in this new release too. Introduced by the perfect ‘White Dress’, a self-reflection on her start in the music business, the 11 tracks reveal a new Del Rey, “ready to Leave LA”, as she sings in ‘Let Me Love You Like a Woman’, writing Americana and country-infused songs, duetting with Nikki Lane, Weyes Blood and Zella Day – this latter for a Joni Mitchell cover. Diamonds turned into turquoise, and what once was California now is Arkansas. Everything is just right in Chemtrails – the lyrics, the themes, the delivery, the majestic drums that beat through the songs, the impeccable production. If anything, it’s almost too perfect to be truly memorable.