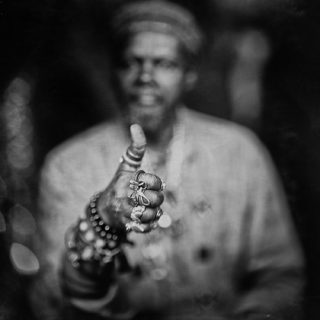 Born in Birmingham, Alabama, and residing for many years in Atlanta, ‘remarkable’ doesn’t quite do Lonnie Holley’s life story justice. Growing up in an America still in thrall to Jim Crow laws, the first thirty years of his life were marked by constant struggle, from abject poverty to jail time, to barely surviving a serious car accident. When he started to make visual art at the age of 29, working mainly in sculpture, his pieces were consistently influenced by the turbulence he’d endured up to that point; he often says that the first pieces of art he remembers working on were gravestones that he carved for his sister’s two children, who died in a house fire.

Now, after a whirlwind few years that have seen the 68-year-old tour with the likes of Animal Collective and Deerhunter after Atlanta art collector Matt Arnett helped him to record his musical ideas, he releases ‘MITH’, a staggering work of unbridled ambition, intelligent improvisation and, above all, profound soul. Holley crafts the tracks more like sound collages than traditional songs, and his lyrical style is thoroughly in the vein of stream-of-consciousness – accordingly, don’t go expecting to hear ‘MITH’ relayed faithfully if you’re able to catch him on the road.

The lyrics are a snapshot of the time they were written in; ‘I’m a Suspect’ laments police killings of black men, and ‘I Woke Up in a Fucked-Up America’ might be the most incisive musical encapsulation of the country post-Trump since he was elected. The former unfolds over tender synth lines, whilst the latter’s backdrop involves discordant brass and electronics as well as chaotic percussion; Holley is speaking musically to the lyrical content every time. On that front, the record has an undoubted centrepiece. ’I Snuck Off the Slave Ship’ has Holley howling out a lifetime’s experience as a black man in America over nearly 18 epic minutes, with a dramatically freeform instrumental that incorporates piano, drums and the sound of crashing rain over an ominous bass rumble. Extraordinary.

There's nobody in the world quite like Lonnie Holley