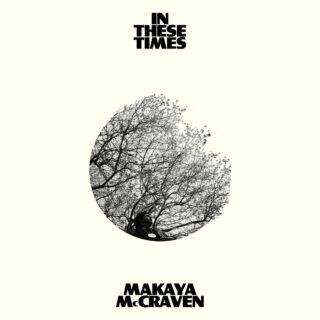 Beat technician Makaya McCraven is far from simply a virtuous performer with the sticks in his hands. The New Jersey-born, Chicago-raised drummer is also a real maestro behind the desk, a character as comparable to Madlib or Dilla as he is to Art Blakey or Max Roach. 2020’s reworking – nay, reconstruction – of Gil Scott Heron’s final album We’re New Again breathed life eternal into one of the greats’ curtain calls, whilst last year’s Deciphering the Message saw him rework gems from the Blue Note catalogue into a masterwork in his image.

While the qualities of these efforts have been absolutely undeniable, it’s very exciting that what we have with new album In These Times is a project that is entirely of Makaya McCraven’s conception; a passion project that’s seven years in the making, running in the background during all of his other ventures, wherein McCraven musically bears all. And it’s beautiful.

Collaborators like Tortoise’s Jeff Parker and harpist Brandee Younger of course leave a distinctive mark, but this record is about the full, cohesive sound of every part working in tandem to realise McCraven’s creative ideals. Indeed, McCraven is always keen to express the joy that his virtuoso partners bring him, but his nimble production work, emphasising every single note, is the glue that binds this LP together.

Melodies cascade upon melodies, each track is a profoundly luscious composition. The title track combines a sweeping string lament with the heavensent flickers of the harp, whilst ‘This Place That Place’ sees the ensemble construct an elegant cathedral in luxuriant brass. In These Times is a sumptuous record that really cements Makaya McCraven’s place at the vanguard of worldwide jazz.