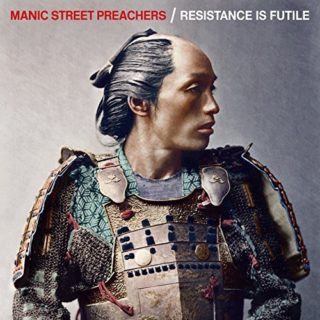 In that historical sense, ‘Resistance is Futile’ speaks to a three-decade love affair that’s endured its triumphs and challenges but, more importantly, this is an album that’s a vindication of the Manics’ survival. They’ve never been a band afraid of embracing their complexity, eloquently speaking (and shouting about) the nuances of philosophy, politics and history—and they’ve (almost) always achieved it with an intelligent snarl, a sweeping elegance or a lyric to stop you in your tracks.

Here, they sound invigorated; driven by the venom that gave the protest anger of those ‘Generation Terrorists’ years a politicized bite but softened with the big, orchestral bluster that characterized ‘Everything Must Go’. It’s a potent (if sentimental) combination that finds an easy symbiosis but also proves out that, even this far in, ‘Resistance is Futile’ isn’t an album-by-numbers.

FEATURE: Nicky Wire discusses the most non-Manics thing the band has ever done – get older

The soaring strings of opener ‘People Give In’ wouldn’t have sounded out of place on ‘Everything Must Go’, ‘Hold Me Like A Heaven’ blooms into something that’s both tender and blazingly anthemic while ‘Sequels of Forgotten Wars’ allows James Dean-Bradfield to powerfully, characteristically cut loose. In fact, on ‘Broken Algorithms’, Bradfield sounds like he’s 25 again – all balaclava attitude and searing guitar – in the track most reminiscent of the dissenting energy that propelled their debut.

Perhaps, though, it’s left to ‘Dylan and Caitlin’ as a song only Nicky Wire could write and the Manics could bring to life. A story about the tempestuous relationship between poet Dylan Thomas and his wife, there are shades of ‘Little Baby Nothing’ (where Bradfield dueted with Traci Lords) as he sings with fellow Welsh singer, The Anchoress.

An album alive with hope, history, nostalgia and pride, this is the Manics at their most melodic and uninhibited, but when Bradfield sings “People get tired/people get old/people get forgotten” on ‘People Give In’, you feel that for all of Wire’s intelligent lyricism, there’s a healthy sense of introspection that’s almost too literal to cleverly try and hide. It will always be strange to think of the Manics as the unassuming elder statesmen they’ve become but, even at these later stages, few bands do ‘once more with feeling’ quite like they do.