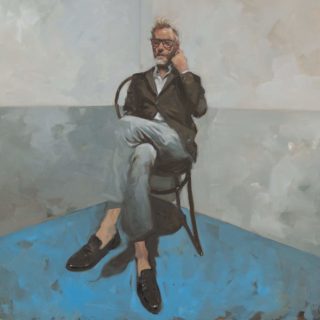 Over the last two decades, The National have made a dependable living on sad songs about sex, death and self-loathing. Hoards of glum head-nodders share a residence in their surreal adages; I’ve been one of them. I was carried to Ohio in a swarm of bees, you and your sister do live in a lemon world, it is a terrible love and I am walking with spiders. It’s a strange sing-a-long: the lyrics don’t technically make sense, but something in their fantastical construction footholds a real, communal and emotional resonance. The easiest conclusion is that Matt Berninger must hold the answers – a frontman perennially dressed too scruffily for the funeral, whose answers to stage fright include bringing along a teleprompter and downing a pint of white wine on the rocks (a ‘cocktail’ he’s called a Cincinnati Sangria).

Perhaps unlike his more creatively restless bandmates, you get the impression that Berninger has always been content with his lot. Even his collaboration with Menomena’s Brent Knopf under the name EL VY five years ago appeared to simply pass the time while alternating Dessner twins immaculately produced a new critically-acclaimed album each week. Here, Berninger teased the arrival of his debut solo album with a watery apple pie and the lyrics to ‘Slow Show’ – a cult love song on spiked lemonade, hardly the precursor of a man desperate to rebrand from morose and sleazy alt-rock. But these are generous times; if the latest Dessner side-project shows anything, it’s that core elements of The National’s sound can exist in a Taylor Swift album as readily as Serpentine Prison.

The sound is worlds away from The National, despite bringing along many of their frequent collaborators; Booker T. Jones’s Memphis-style production is an audible switch from the driving sonic swirls and indulgences of their post-Sleep Well Beast output. Berninger’s signature baritone is the sole focus. ‘Distant Axis’ mourns losing friendships through a juvenile guitar strum, while standout ‘Take Me Out Of Town’ is a shattering, self-defeating slow ballad that takes minutes for another instrument to cautiously interrupt Jones’s solo piano. His lyrics, for once, are upfront: “Swear to God, I’ve never been so burned out, gonna lose it any minute”. ‘All For Nothing’ then builds with Kyle Resnick and Ben Lanz’s rousing brass section. Berninger’s voice revels in these melodic soul-tinged rock songs – even the gorgeously self-destructive ‘One More Second’ sounds desperate to enjoy itself, discarding its break-up narrative for a lush Hammond B-3 organ instrumental.

Elsewhere, Berninger’s lyrical transgressions are at their best, there to catch you off-guard when you’ve had a second drink. Where Swift might term them easter eggs, he repeats images from past decade’s material like a recurring dream he can’t shrug off. “Don’t make me wait for you at the Serpentine Wall,” he shouts in EL VY’s ‘Return to the Moon’, now he’s telling someone in the title track that he misses them at the Serpentine Prison (a twisting, caged sewage pipe that drains its contents into the ocean by Los Angeles Airport). “I’ll be the one in the lobby in the collared fuck-me shirt,” he says in EL VY’s ‘I’m The Man to Be’, now we fall into that same outfit in ‘Collar of Your Shirt’. These moments of slapstick poetry are scattered throughout Serpentine Prison like bird seed, and they’re strangely arresting. It’s some of his most carefree and heartfelt work for years – that’s pretty much all we could ask for.