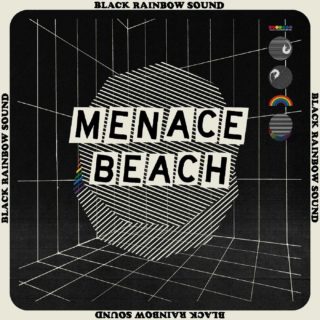 Since their 2015 inception, Menace Beach have been locked in their own creative rivalry. The on-going tug-of-war between the band’s natural guitar-based safety net and Liza Violet’s maturing synth experimentation has felt well documented, but only now has their sound’s direction been turned fully on its head.

With an impressive history of collaborators boasting Pulled Apart By Horses’ Robert Lee, Mansun’s Paul Draper and previous producer MJ of Hookworms, Menace Beach have ditched their past by turning to the production savvy of Matt Peel from fellow Leeds outfit Eagulls.

Their third album, ‘Black Rainbow Sound’ sees, for the first time, Violet’s instinctual synth drive defeat the brawn of the band’s guitar-rooted foundations. The hypnotic static of analogue synths stand with authority at the forefront of the mix throughout.

The lead single and title track featuring former Fall member Brix Smith Start makes for an appropriate scene setter imposing driving force and smouldering atmospherics. Buried amongst the heap of vintage electronics, the band still tip their hat to their recently familiar sound during tracks like ‘Mutator’ and ‘Hypnotiser Keeps The Ball Rolling’, but otherwise Menace Beach have stepped out of the old and into a truly sonically sweeping new.