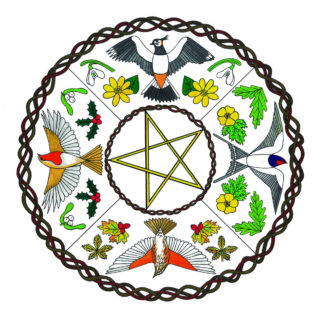 Applauding the theatrics of our natural world, few would’ve predicted the pastoral prose of Modern Nature. For the project’s mastermind Jack Cooper, the premature expiry of his former band Ultimate Painting proved to be a pivotal juncture for the psych-pop purveyor. Straying beyond wiry guitar lines and soft-edged revivalism, the gentle whisperings and plaintive jazz footing of last year’s How To Live sowed the seeds of rural melancholy; an ambience that’s duly restored in his band’s follow up mini-album, Annual. Reflecting a reality infrequent from most music that exists in the name of nature, changing seasons have rarely sounded so intimate beyond Modern Nature’s musings.

Lifted from the scribblings of periodic diary entries, evolving observations of the world outdoors make up a conceptual calendar, each season loosely punctuated by the memories that defined it. Though this time without the motorik diligence of BEAK>’s Will Young, free-flowing saxophone from Sunwatchers’ Jeff Tobias takes up a commanding role. As the first light of spring seeps into ‘Dawn’, docile strings gently resonate under the still morning glow. Ambling guitar lines swell beneath collaged choruses on ‘Flourish’ whilst delicate piano patter on ‘Halo’ accents Tobias’s lyrical sax inflections.

It’s fitting that Kayla Cohen (aka Itasca) fills out the vocals on ‘Harvest’. Fresh from her own project, the bucolic folk of her 2019 album, Spring runs largely adjacent with Cooper’s own sensibilities. Her serenading of autumn feels nailed-on and her place on the record oddly justified. Perhaps it’s this virtue that makes Annual so persuasive. Often romantic but rarely sensationalist, its earnest narration feels well-rooted and unafraid of being held to account. Receding instrumentation on ‘Wynter’ eventually brings Cooper full cycle. Annual isn’t just an almanac for the changing seasons, more a visceral reaction to it.