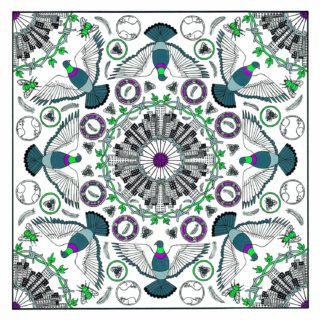 Modern Nature’s debut album opens with a sombre instrumental that sounds like an outtake from a Wong Kar-wai film. A string-based neo-classical piece, ‘Bloom’ conjures images of rain lashing down on a dark, autumnal street. It’s the most immediately striking track on How To Live, a release that takes the listener from an urban environment to more rural escapism. The concept is the logical meeting point for Ultimate Painting’s Jack Cooper and BEAK>’s Will Young in that it melds their previous dabblings in pastoral ballads, Krautrock and atmospheric electronica.

Emphasising mood over memorable hooks, the ten tracks here weave together gently looped guitars with the hubbub of street noise and electronic thrum. These core elements are variously punctuated by saxophone breaks (as on the urbane, motorik jazz of ‘Footsteps’) and backwards tape (the stop-start psych-folk of ‘Séance’).

A composite soundscape rather than truly discrete tracks, they’re held together by Cooper’s vaguely dystopian stream of consciousness (“Isolation, repetition, spark burst fission…” runs ‘Footsteps’). Delivered in a voice that’s been steam-rollered to a perfect blank, any sense of emotional judgement is derived purely from the arrangements. ‘Nature’ is a case in point, with the insistent Krautrock of its environmental warning being interrupted by uncommonly raucous guitar.

It can be tempting to imagine how other artists would interpret these blanks – Cate Le Bon could certainly bring more energy to the folksy ‘Criminals’ – but there’s a certain calm to the record that’s a good lesson in ‘how to live’.