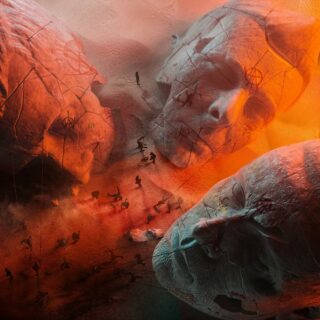 First things first: more bands should be silly. Being in a band is quite silly when you think about it, and that’s part of the appeal. For all their faults – and believe me, we’ll get to them – Muse at least understand that much, and that’s one reason to like them. You can feel the ‘but’ coming, can’t you?

Anyway, Matt Bellamy and his little mates are back with Will of the People, and it’s really fucking silly. They’ve described it as a “greatest hits album of new songs”, in effect a journey through the various aesthetics of their career so far – you know, the stuff that sounds a bit like Radiohead to the stuff that sounds a lot like Queen – that doesn’t actually include any old material. ‘Compliance’ has the direct, synthy pep of their late-’00s pomp; ‘Kill Or Be Killed’ sounds like a turbocharged offcut from Origin of Symmetry; the nails-on-a-blackboard earnestness of ‘Ghosts (How Can I Move On)’ is the perfect soundtrack for a trip to the Wembley bar.

On the band’s own terms, then, it more or less works, but let’s be frank: we’re not talking about Scott Walker or Miles Davis here. The actual content of a Muse song has scarcely changed over the last 25 years, regardless of whether Bellamy is currently most interested in showing off how good he is at guitar solos or how good he is at piano solos.

The problem with Will of the People, then, isn’t that it doesn’t do its job of being a Muse album very well. It does that perfectly competently, and it doesn’t really matter that one of the main requirements for being a Muse album is that it’s horrible to listen to. The real issues start to arise when this silliest, most purely escapist of bands start to rub up against the real world.

Bellamy’s conspiracist leanings have been well-known for a long time, and generally laughed off as the kind of rock star eccentricity we could arguably do with more of, but considering the way that conspiracy theorists have grown in sinister prominence over the last few years – as the antisemitic ‘Cultural Marxism’ and ‘Great Replacement’ theories are bandied about by elected politicians on both sides of the Atlantic, anti-vaccination activism has become semi-mainstream across the world, giving all kinds of reactionaries their most direct opportunity to radicalise idiots in years – hearing him express his concerns about threats to “the Western empire” in a promotional statement, before bellowing about “Compliance!!!” in one of the album’s singles, doesn’t feel great. To then hear him directly borrow from – as in, to the point where they must have to be paying royalties – alleged sexual abuser Marilyn Manson on the title track (it sounds exactly the same as ‘The Beautiful People’) feels even worse.

To be absolutely clear: I don’t think Bellamy is an anti-vaxxer, an apologist for sexual abuse, QAnon follower or anything like that – I think he’s a silly rock star who’s living in the same dream world he has for decades now, who almost certainly means nobody any harm. But he’s got a massive following, mainly of nerdy young men. It’s hardly an act of ‘cancellation’ or ‘woke moralism’ (to quote someone else who appeals to that audience, ludicrous twat Jordan Peterson) to suggest it might be good for someone this famous, who (somehow) inspires this level of devotion, to engage with a real world that’s changed quite a lot since he started his band before just cracking on as usual.

Be silly! Indulge your most juvenile instincts! Have a laugh! Just remember you’re not literally living on that spaceship you’re taking on tour with you. I actually think that Muse would even be improved on their own terms if they had a tiny, entirely non-inhibiting bit more self-awareness; for this kind of escapism to work, you do need some grasp of what it is you’re escaping from.