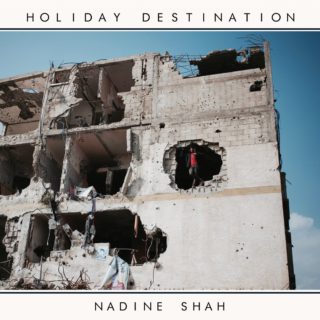 If you’re still trying to get over the annus horriblis that was 2016, then 2017 hasn’t provided much comfort thus far. But if last year was our collective nadir, then at least it spurred many artists, politicians and activists into action, to try and affect change. People like Nadine Shah. “Artists need to document the times they live in,” she recently stated in an interview, and ‘Holiday Destination’, her third album, is a bold, heartfelt beast that wears its politics and defiance firmly on its sleeve. The Calais refugee crisis, the Syrian civil war, the rise of nationalism, societal pressure and mental health are just some of the global issues that inspired the record, but her songs are neither rage-fuelled nor preachy.

Instead, she opts for brutal honesty, Shah pulling no punches; “The bad guys are winning,” she laments on the title track, a sharp, fizzing post-punk anthem. Such uptempo urgency is a recurring theme, and being fired-up and engaged suits the artist well; her voice has never sounded so vital, her compositions never hitting as hard.

Like all the best kitchen-sink writers, Nadine Shah taps into fundamental anxieties on new LP