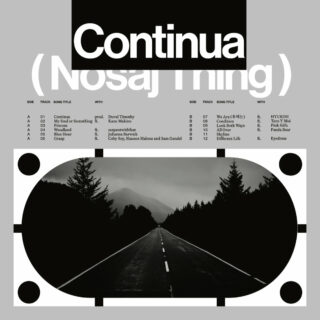 Continua, keep going… This is the motto that Los Angeles producer Jason W. Chung has been living  by as of late. It’s been five years since his last studio album under the Nosaj Thing moniker, and  during that time he’s had to survive home break-ins, family health scares and, like the rest of us, the  general nightmare that our planet is turning into. But despite these hardships, he’s continued down  the unforeseeable road ahead, now emerging with his most absorbing LP to date.

Chung meshes his electronic stylings and mix-board prowess with shades of classical, trip hop, rap and R&B, while maintaining a tone that sounds as if it should only be played in grand, shadowy  rooms filled with the fog of a smoke machine. With noticeably more resources and a higher budget than his early releases, there’s a rich texture to songs like ‘Process’ and ‘Different Life’, which feel  like slipping into a warm, weighty body of water where the pace of life slows.

As well as being his most atmospheric album, it’s also his most collaborative, with 12 of his contemporaries making appearances, each one feeling at home in his otherworldly soundscapes. The ever-busy Toro y Moi delivers the hook for ‘Condition’, during which it occurs to us that in the hands of a less interesting producer, this song could have turned into another evaporative moment  of trippy R&B. Instead, Chung is able to maintain the head-bopping groove and layer it with beautiful  strings and a sweetly melancholic vibe that is distinct to himself

Some of the other memorable link-ups come from Kazu Makino, serpentwithfeet and Pink Siifu, but  perhaps the finest is the Julianna Barwick collab ‘Blue Hour’, which echoes Massive Attack. These moments all add up to an album that is, like its eerie cover photo, one of the most cinematic electronic albums of the year.