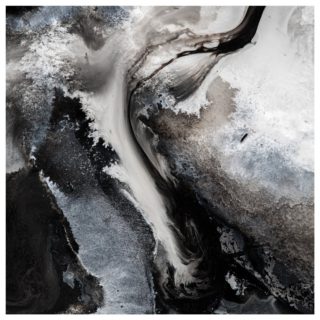 There is a ghost hovering all over ‘Heiress’, the new collaborative album by multi-instrumentalists and songwriters Ed Tullett and Novo Amor (aka Ali Lacey). It’s the phantom of what Bon Iver’s third album would have sounded like according to all of those who were disappointed by the twists and turns of ‘22, A Million’. Not surprising, as, after all, prominent in Tullett’s resumé is a remix of the Wisconsinite electronic-folk master’s ‘Hinnom, TX’ crafted for the ‘Bon Iver, Bon Iver Stems Project’. But maybe, this time, this influence got the best of the British musicians’ efforts.

From the soft falsetto that welcomes the listener in the opening ‘Silvery’, to the majestic crescendos of ‘Cavalry’ and ‘Anatome’, to the multilayered structure of both analog and synthesised sounds and voices that run all through the 11 tracks of the album, it’s impossible to take that American reminiscence out of one’s head. The result is enjoyable, but a bit lacking of personality, and it’s a pity, especially once ‘Dancer’ starts playing, showing the songwriters’ unexpressed potential.