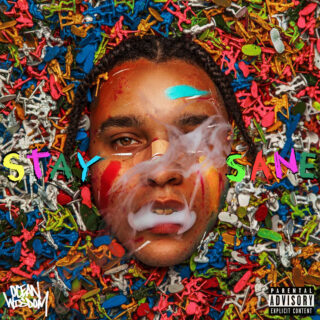 So much of the talk about Camden rapper Ocean Wisdom the past five years has been about the rapidity of his flow. And it’s true: he’s got lungs like a whale and officially spits words quicker than Eminem, according to Guinness World Records. That skillset saw him attract collaborators as esteemed as Method Man and Dizzee Rascal, and comparisons to speed-merchants like Busta Rhymes. While there are some impressive sprints on his fourth album, it’s not simply an exercise in flashy velocity. In fact, it’s when Stay Sane is cruising that it’s most compelling – think Childish Gambino rather than, say, Twista.

Single ‘Drilly Rucksack’ is a case in point – the fictional tale of a magical rucksack that shields its owner from the evil of Tories, albeit in a violent way – where Wisdom artfully glides between gears and modes. Opener ‘Gruesome Crimes’ is similarly ear-catching, marrying goofy U.S. college rap musicality with a British sense of humour. Maverick Sabre adds a soulful flourish to ‘Uneven Lives’, an ode to the healing qualities of time off and time away.

It’s ‘Racists’ though, featuring the recognisable Novelist, that’s perhaps the most arresting moment; an honest, depressing and lasting reflection on British bigotry: “Racists they come and won’t go… I hope you drop down dead while you’re shoveling cocaine up in your nose,” he rasps. For one so quick with his delivery, it’s now that Ocean Wisdom’s steadied the pace that his output grows in power.

Despite all the guitar solos and silly riffs, this is a weirdly meh Sleater-Kinney album

Lexicon is an impressively deep, hefty piece of work from 羅伯特

If the hooks on Mykki Blanco's new project don't give them a massive hit, *that* line about hamsters definitely deserves to