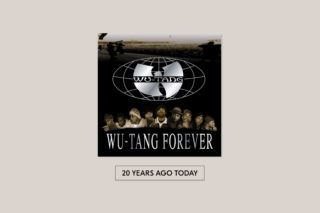 In February 1997, the Wu-Tang Clan released the comeback song ‘Triumph’, their first single in three years and a teaser from their forthcoming second album. It was nearly six minutes long, had no chorus and nine verses. Amid its 1,000-word lyric sheet were references to the Egyptian god Osiris, the Greek philosopher Socrates, the video game Mortal Kombat, the disco band Shalamar and the black preacher Timothy Drew, who formed the Moorish Science Temple of America, a forerunner of the Nation of Islam. Its title never appears, appended instead simply as a descriptor of the track’s density and breadth, and even a predictor of its unexpected popularity on radio.

‘Triumph’ wasn’t even the longest track on ‘Wu-Tang Forever’, the Wu-Tang Clan’s longest album and a record that, revisited even now in an era of digital deluxe editions of hip-hop albums that frequently sprawl out to the two-hour mark, remains so relentlessly colossal that one wonders how many of the reported two million copies sold have ever actually been played through in one sitting.

But scale isn’t ‘Wu-Tang Forever’’s only facet to be amped up. Lyrically, too, the album barely draws breath for two hours, as Clan members pass verses around like a baton in a sprint relay, and everything’s on the table thematically, too: there’s virtuoso grandstanding, grim tales of gang violence, philosophical musings, conspiracy theories and even, on ‘The MGM’, a quasi sports write-up, as Raekwon and Ghostface Killah discuss the boxing match between Julio Cesar Chavez and Pernell “Sweet Pea” Whitaker at the MGM Grand in Las Vegas.

While ‘Wu-Tang Forever’’s unyielding exuberance is lots of fun, however, it’s simultaneously hard to escape a feeling of overcompensation here too, and perhaps for good reason: after all, ‘Forever’ had to follow a record that was already being hailed as one of hip-hop’s greatest, and one way of avoiding comparison is just to double everything. That’s not to say that this is all quantity and no quality though; indeed, while virtually every double album in history can be condensed into a better single LP, it’s a testament to ‘Forever’ that an album this vast never really lulls. What’s more, it’s undeniable that ‘Forever’ blazed a trail too: without its pioneering production, Kanye West’s records would sound entirely different, and the several of the claustrophobic epic posse cuts here, majoring on personality and defiant in their lack of hooks, provide the blueprint for the likes of Odd Future and even the second wave of grime.

The week before ‘Wu-Tang Forever’ reached number one on the UK album charts, another band released a comeback single that, like ‘Triumph’, was six minutes long, had no chorus and yet was a radio hit. And while Radiohead’s ‘Paranoid Android’ has little compositionally in common with anything off ‘Wu-Tang Forever’, the coincidence of both timing and self-confidence here seems rather fateful twenty years on: it places the Wu-Tang Clan, and their behemoth second album, in formidable company, if not in terms of sheer quality, then at least in those of outlook, ambition and vast scope.