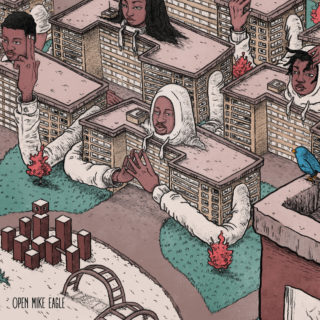 Open Mike Eagle isn’t normally a combative rapper. His cakewalk delivery is usually soft, thoughtful, and often goofy. It’s surprising then to hear him so passionate on his latest LP: “don’t call me n***** or rapper / my motherfuckin’ name is Michael Eagle” he rasps on ‘Brick Body Complex’. Drawing the fury of Nas’ ‘Illmatic’ into the fantastical universe of DC comics, ‘Brick Body Kids Still Daydream’ is a defiant sci-fi elegy for the collapse of American social housing or, more specifically, the once tall buildings of the Southside Chicago projects where Mike spent parts of his childhood.

This is the Chicago MC’s most ambitious work, brimming with manifold voices, unified by formidable compassion. In these tracks are hard-man fathers “who ain’t cried since ‘94 or something”, church folk, and casual soft drug-taking mothers – all of whom are celebrated for their everyday dignity and herculean strength.

But the young daydreamers are the story’s protagonists; opener ‘Legendary Iron Hood’ reads as the origin of a child superhero, as ‘Daydreaming in the Projects’ honours the games of “ghetto children” as quietly revolutionary acts, heralded by breathy horns and a jubilant chorus.

However, for all the hope in ‘Brick Body Kids’, catastrophe still looms large. Playful beats descend into burning rubble by the album’s end (“it’s the sound of them tearing my body down”), and the characters – whom we now know and love – are scattered, much in the way generations of people were separated by the super-villainous demolition of Chicago’s Robert Taylor Homes.

While considering that much of today’s sharpest hip hop releases are stamped with his name (as collaborator with Busdriver, Kool A.D, Milo and many others), ‘Brick Body Kids’ is Mike’s greatest achievement yet. One gets the impression that new worlds are now open for him to explore, other forgotten histories ready to be reanimated. What’s more, Mike knows it, declaring “ain’t nothing gonna stop me now”. 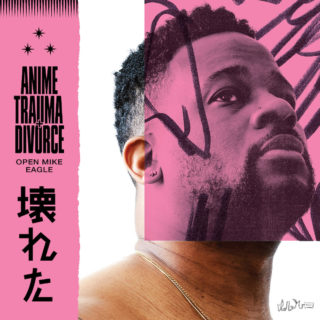