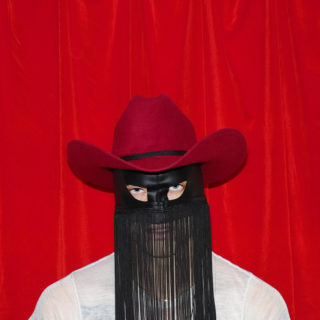 A queer cowboy in tasselled bandit mask and Nudie Cohn style shirt, Orville Peck presents a highly stylised version of America on this, his debut album. The narrative songs are populated with vivid images of desert highways, worn out gamblers and hustlers that have escaped from the pages of Denis Johnson or JT LeRoy.

These vignettes, which dramatise events from Peck’s own past, are rooted in the traditional storytelling of outlaw country musicians. Indeed, his roll call of archetypal characters would be considered pastiche is they weren’t imbued with such genuine affection.

The same fine balance between homage and parody is displayed in the music. As conventionalised as the lyrics, ‘Pony’ is dominated by the country-pop of the 1960s. His rich, crooning tenor is heavily reminiscent of Roy Orbison being appropriated by David Lynch. This is especially evident on the lonesome, twanging country noir of ‘Big Sky’, which is an emotive mash-up between the Big O and Lana Del Rey, another artist who’s fostered a carefully calculated image.

There are times when these period references are rebooted with classic ’80s production, too, as on the trotting pace of ‘Winds Change’ and the synth twinkles on ‘Queen of the Rodeo’, and deeper cuts into the genre, as on the brief synth interlude of ‘Old River’, which honours the bluegrass of the Foggy Mountain Boys.

More esoteric influences also occasionally surface, like the shimmering dream-pop on ‘Turn To Hate’ and the intense, post-punk guitar dynamics on ‘Buffalo Run’.

This sound revels in the past with a knowing honesty: ‘Dead of Night’ lyrically puns Johnny Cash, and the soulfully lachrymose ‘Kansas (Remembers Me Now)’ has the decaying crackle of a radio being tuned, which suggests the erasing of memories and history.

Yet despite this, only two tracks teeter close to the edge of parody. ‘Hope To Die’ breaks into the overly dramatic key change that was favoured by Whitney Houston, and the slide guitar-driven ‘Roses Are Falling’ features a spoken word interlude (‘Sometimes when I’m around you/ I feel like pure evil’) that brings it dangerously close to The Bonzo Dog Doo-Dah Band’s ‘Canyons Of Your Mind’.

There’s nothing instrumentally on ‘Pony’ that couldn’t just as easily be performed by late period Elvis or Chris Isaak. What defines them is that they’re played straight and that, regardless of their avowed root in personal history, they rarely expose a chink in Peck’s mysterious persona.