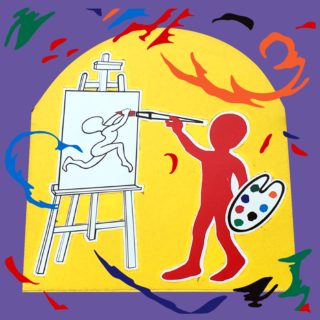 “You wanna groove with me? Then I need strict compliance,” intones Veronica Torres on ‘Top Ticket’. Expressed with all the passion of a bored supermarket announcer, this repeating call and response lyric feels like a strapline for P.E.’s debut album. Enigmatically called Person, this is a piece of work that blurs the lines between seduction and violence. This is what the band describe as “human music for the 21st century”.

The members of P.E. are basically a who’s who of the New York experimental underground. Lead-singer Torres, Jonathan Campolo and Benjamin Jaffe were all formerly of criminally underrated art punks Pill until they joined forces with Jonathan Schenke and Bob Jones of electronic post-punk outfit Eaters. Beginning as an improvisational outfit has informed an equally free-form recording process, resulting in what is in effect a Cronenberg movie turned into an electronic album.

A proper Chimera of a record, Person walks a tightrope between well-trodden punk and industrial tropes yet remains fiercely original. For those looking for straight forward tech-noir then ‘Machine Machine’ and single ‘Top Ticket’ have got you covered, but it’s on the quieter numbers where P.E. are their most subversive: the dehumanised classic rock of ‘Lovers’ Lane’ and ‘Pink Shiver’ sees hokey lyrics about backseat make-out sessions delivered with disturbing emotional flatness.

This album’s best moments are when the pop feels like it’s been coldly punched out by a machine, and, like all machines, either it will fascinate or appal you.