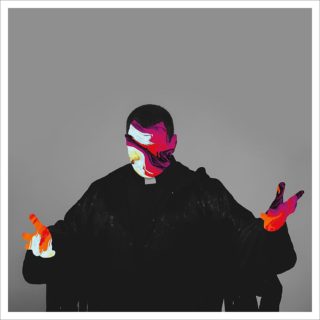 If you name your band Pigs Pigs Pigs Pigs Pigs Pigs Pigs (hereby referred to as Pigs x7), you’re immediately opening yourself up for a certain amount of mockery. The Newcastle five piece are all too aware of that, and their blistering three-song debut album ‘Feed the Rats’ revels in its ridiculousness. I mean, surely no one can scream “I AM THE DEMON! I AM THE NIGHT! I AM ADONIS!” and mean it, let alone on a song called ‘Psychopomp’, right? Bookended by two tracks which brazenly pass the fifteen minute mark, it’s an LP marked by Matt Baty’s primordial invocations, which sound like they were recorded from the top of a mountain, and bludgeoning detuned guitars, designed to blow your speakers.

There are shades of Sabbath and Sleep, while Baty’s vocal on ‘Sweet Relief’ echoes Lemmy’s sorely-missed emphysemic rasp. The slow burns, bone-on-cave-wall drums and sludgy riffs aren’t going to be everyone’s cup of blood, but as howls into the void go, the Pigs are alright.