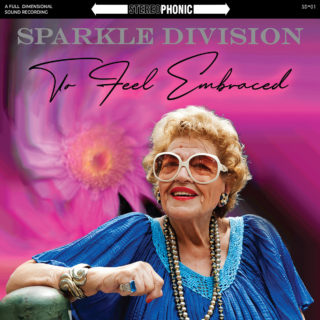 Timing’s a funny thing. For those who primarily know William Basinski for sprawling ambient works like The Disintegration Loops, our current state of flux might seem like it’d be perfectly soundtracked by another in his long line of dislocating, diffuse audio essays. We’ve all been isolated and introspective, right?

Happily, Basinski knows better. He and his collaborator Preston Wendell have been sitting on To Feel Embraced, their debut record as Sparkle Division, for a while, and only now have chosen to release it. Apparently, they had reservations about dropping what they saw as a “euphoric” album into an increasingly troubled world, but as Basinski commented recently, “Well, damn it, if the time ain’t right now, it never will be!”

There are traces of Basinski’s former work in the delicacy of the production, the vinyl hiss and pulsating compression betraying the soundworlds in which his previous interests have been focused. One can also pick out intermittent shades of influence here and there – Leyland Kirby’s work as The Caretaker looms over some of the sleepwalking jazz arrangements, and there are parallels to be drawn with the wistfully overdriven nostalgia of Aidan Moffat’s Lucky Pierre records – yet taken as a whole Sparkle Division feels like something very distinctive indeed. The unobtrusive conventions of 21st century ambient music, and particularly the more vaporwave-adjacent strands of the contemporary classical canon, are upended, their glazed inertia replaced by a maximalist approach to making you relax, forcing a good time out of you rather than allowing some more abstract euphoria to do the heavy lifting. Considering such abandon has been rather hard to come by in recent months, it’s hard to resist.