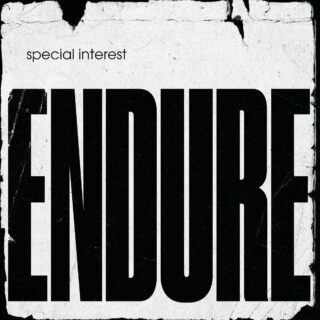 The idea of fusing club music textures with rock songwriting is hardly new; from the earliest rumblings of no wave and post-punk in the 1970s onwards, adventurous artists have been tinkering with drum machines as well as guitars in the pursuit of some novel alchemy. Yet it’s rare to encounter a fusion of these aesthetics that’s as seamless, thrilling and physical as the one Special Interest manage to conjure on Endure.

Since they burst out of New Orleans in the middle of the last decade, the quartet of Alli Logout, Maria Elena, Nathan Cassiani and Ruth Mascelli have been colliding industrial techno with elements of squalling noise-rock, white-knuckle punk and sashaying disco with joyous abandon, creating a body of work in which instantly-accessible almost-pop like ‘(Herman’s) House’ coexists happily with red-raw expressions of queer rage (‘Don’t Kiss Me In Public’, ‘Head’). Endure isn’t their debut album, but it is their first on a label with the reach of Rough Trade, and therefore exposes them to a bigger audience than ever. They are more than ready for this platform.

Opener ‘Cherry Blue Intention’ is a perfect Special Interest track, convulsing, visceral and hooky in equal measure, glimmers of bittersweet romantic exhilaration (“I’d say I love you but this summer tastes cherry blue”) poking through the gaps in the jet propulsion rhythm. Recent single ‘(Herman’s) House’ remains a floorfilling gem, and the hectic dirge of ‘Concerning Peace’ reassures the early heads that Special Interest are still more than capable of the brutality that both makes their heavier work more impactful and their occasional tenderness so cathartic. The likes of ‘Midnight Legend’ and epic closer ‘LA Blues’ bring the tempo down slightly like perfectly-timed DJ set breathers, keeping the band’s newfound scope firmly rooted in the club.

Perhaps what makes Special Interest’s brand of industrial dance-punk so successful, so infinitely distant from the worst post-acid house lad rave or piss-weak mid-’00s indie disco, is their sense of political and social commitment, and a recognition that such commitments have always been central to the most important punk and club culture. Disco, house and techno are all inextricable from their roots in queer communities of colour; from day one up to now, punk and DIY cultures (at their best) have provided a much-needed haven for new forms of radicalism, anti-fascist organising and LGBTQ+ fulfilment. Although they’re understandably resistant to being pigeonholed as solely a “queer band”, a term they find imprecise and actively unhelpful, Special Interest are rooted in those spaces, those communities, and channel them into their music with a depth and versatility that few groups can rival right now. Endure is their most complete work yet, and it feels like there’s so much more to come.