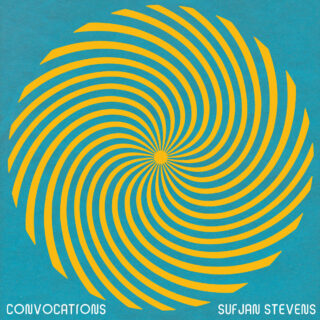 The Swiss-American psychiatrist Elisabeth Kübler-Ross hypothesised the five stages of grief to be a linear experience in her book On Death and Dying – denial, anger, bargaining, depression, and acceptance. Almost six decades have passed since its publication has soaked into popular culture, and while she retracts many of the mistranslations that have spiralled from her work, its factual appearance can still provide a comfort for those dealing with their own loss, glad for the theoretical company.

Following the death of his biological father last autumn, Convocations is a new 49-track album by Sufjan Stevens, split across five volumes – Meditations, Lamentations, Revelations, Celebrations and Incantations – each a vessel to reflect on mourning, healing and catharsis, studying his own stages of grief. It’s a grief that has always been positioned as disarmingly and admirably public domain, from the humanising character studies of a serial killer, lamenting his victims, to his pained masterpiece Carrie & Lowell, written in years following his mother’s passing.

While he sells heartbreak by the ounce, Sufjan’s so-called “statement” (read “vocal”) albums are bookmarked by the occasional off-piste experiment with variable rewards, like a modern-day McCartney excusing the eponymous in-betweens. From volumes of surrealist Christmas music about lumberjacks and unicorns to scores for Justin Peck and the New York City Ballet, his most recent excursion was made only last year with his stepfather and Asthmatic Kitty label co-founder Lowell Brams, resulting in the thoroughly underwhelming 21-track album Aporia. But where Sufjan’s roaming has usually been with a collaborator, Convocations stands out as his first solo side-project in almost a decade, allowing him to experiment on his own terms. It sadly hasn’t improved the results; here’s our breakdown, volume-by-volume.

To its name, Meditations is caught in its own stasis: a song cycle of recurring chords and progressive electronics, quietly extrapolated from his previous work. ‘I’ copies the melody of ‘Video Game’ from The Ascension approximately for note, nervous to stray from the spider web-safety of major chords. The sound design and textures in its exposition can be arresting, occasionally magical. A wash of choral synths and gently filmic strings build through ‘II’ – the kind that soundtracks beautifully-shot art-house cinema where, for hours, fundamentally nothing happens – into a cutting helicopter drone in ‘V’. From then, a cheap shimmer fades into ‘IX’, and five songs blur into one very two-dimensional sketch, unconsciously hesitant of purpose.

The disintegration of Sufjan’s orthodox Christianity was central to last year’s release of The Ascension. Its 12-minute opus ‘America’ felt disorientated in its loss of faith (“I am ashamed to admit I no longer believe”), while songs named after anxiety medication begged for another remedy (“fill me with the blood of Jesus”). Where his music has orbited faith so explicitly in the past, his deistic certainty has afforded some artistic restraint to his compositions until now, allowing reason to guide form where passion could have overcome it.

The first of Convocations’ unambiguously religious entries is an infinitely more interesting release than Meditations, but blunter and scrappier in finesse – an intricate drawing being coloured in by a paint racer. In the Old Testament, Lamentations grieves the destruction of Jerusalem by the Babylonians. Its bleak poetry grapples with an unexplained evil and suffering – a compelling parallel to Kübler-Ross’s second stage – anger – but Sufjan’s Lamentations is let down again by the arrangement. Any moments of apocalyptic drone imitate a badly watered-down Tim Hecker. At its best, ‘IV’ sounds like scraping a crayon against a radiator, whereas the faux build in ‘IX’ sounds more like a cat inadvertently gate-crashing a Star Wars rehearsal with a Moog synthesiser.

If Seven Swans – an album explicitly celebrating Sufjan’s Christian spirituality – was meticulously crafted away from excess, careful of its effusive subject material, Revelations too gives way. ‘II’ swaps painful drones for a cartoon rocket ship; easy strings soar through pleasant melodies until ‘IX’, that – for all its introductory lessons in melodic percussion – sounds like a mistake at a monastery. If this is an apocalyptic prophesy, we needn’t have worried about the Mayan calendar. It’s some of the more consistent work across the five volumes, but in the same way you don’t listen to Blanck Mass for the three-part harmonies, we’re only this far in because of the name on the label.

Celebrations deals with synthetic beauty and dissonance in a way Convocations struggles with as a whole: the mix is continuous and enveloping, offering more than a lacklustre fadeout between tracks. Robotic cricket chirps stick in the back of your throat, ruminating percussion spools out and lingers unnervingly in the ambient milieu; a vocal alarm sounds in the long grass. The piano-led ‘II’ is the longest composition in the whole collection, allowing Sufjan room to hint at the kosmische and shoegaze-tinged ambient of Mark Pritchard and Tom Middleton, until it doesn’t.

Good things don’t last. Incantations’ ‘I’ and ‘II’ on are some of the most interesting pieces across the entire release; minimal, wobbling melodies rise through an electronic chug like a slow-motion game of whack-a-mole, desperately abridged, contained within a space-jazz musical box, begging to be developed. But Sufjan’s transitions are more obtusely splintered here than anywhere else – eerie melodies and hammering keys lose their impact almost immediately, and the attempted resolutions come across as a random patchwork of GarageBand soundbites, rather than any grand finale.

Convocations is undoubtedly cathartic. Parts are beautiful, haunting even, but across its two-and-a-half hours it’s a necessary requiem of self-indulgence for Sufjan Stevens rather than a compelling project from heartbreak’s luminary, whose insular yet evangelical compositions have scored decades of sorrow. It posits the question at what point a listener should stop eavesdropping. The songs’ innocuous anonymities – each titled simply one through ten – read like an attempt to dodge any obligation to compel in isolation. Much like

amateur poetry with no

logic behind its line

ambient compositions packaged this way should have to justify their singularity, beyond their creator not being able to mix the spare parts together. This isn’t an ambient mass as much as it is a sketchbook with each page ripped out. Sufjan Stevens creating 150 minutes of electronic mood music feels like a harmless auditory equivalent of a vacuum cleaner company being commissioned to build ventilators. In 49 attempts, there’s little that places the artist within the work, and even less to suggest it’s a finished piece, beyond the fact that it’s being presented to us here. Were this anything other than a Sufjan Stevens album, you wouldn’t be listening.