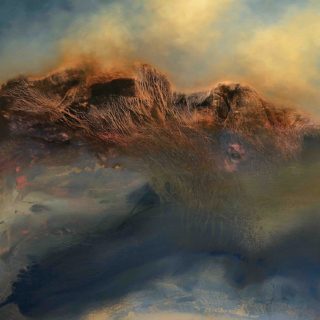 Whatever it is Stephen O’Malley and Greg Anderson have been lacking in their main Sunn O))) output these past few years — call it a slight detour from their chosen path into overt pantomime — April’s Life Metal pulled the long-running doom drone project back into focus with a renewed sense of youthful discovery. The return to that old time abyssal doom, presumably guided in part by producer Steve Albini’s ability to fabricate in-the-room dynamics for the most opulent of larger-than-life performers, proved just the ticket for Sunn O)))’s rebirth, without devolving too much into farcical stagings of past glories.

The first thing to bear in mind with Pyroclasts is that it is supplementary to Life Metal, consisting of palette cleansing intermissions between takes. For most other groups, what you might call outtakes would be singled out as such for good reason. But, as previously argued, the bread and butter of Sunn O))) is usually squirrelled away in the supplementary, buried in live bootlegs and one-offs. Much like its earlier counterpart, Pyroclasts doesn’t seem as adventurous as Dømkirke, and it makes little sense differentiating between these four elemental drones; ‘Frost (C)’ bleeds into ‘Kingdoms (G)’ bleeds into ‘Ampliphædies (E)’ bleeds into ‘Ascension (A)’. But if Life Metal signals the group’s return home, then its sister album is a sketchbook kept along the journey, or a portrait of the ensuing status quo after the fact. It’s bare-bones and purely functional (they even used a stopwatch, and each gargantuan track is parenthesised with its tuning) but no less engaging for it.

Like Lou Reed conceiving his final solo album — the honest to God new age of Hudson River Wind Meditation — simply from the need to find suitable ambience for his Tai Chi workout, Pyroclasts is an album as much about blowing off steam as it is about prolonging Sunn O)))’s infernal project. If reaching a sort of inner peace through heavy, psychedelic drone isn’t part of Sunn O)))’s MO, then what is?