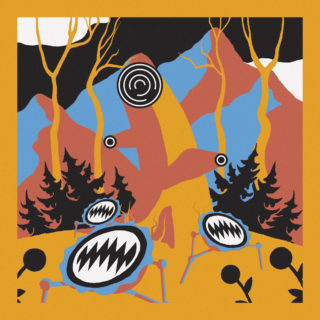 In the U.K. at least, we’re spoilt for exciting new rock bands at the moment. The much-vaunted scenes around organisations like Speedy Wunderground and Slow Dance, not to mention the (even) more underground likes of the milieus around Salford’s Islington Mill and Glasgow’s Green Door Studio, have consistently been producing remarkable groups who are breathing new life into British indie, as reductive and increasingly unhelpful as that genre term might be in 2020. In some ways, it’s difficult to see how Leeds-based Team Picture fit into that – their sound is somewhat unfashionable in its polish and grandiosity, a little out of step with the gnarly, neurotic likes of Black Midi or Black Country, New Road – yet on The Menace of Mechanical Music, their songs are so intoxicating that such incongruities hardly matter.

This is a fluid, elegant record, and there are numerous points at which Team Picture conjure up the kind of full-throated beauty not heard from a British group since the much-missed Wild Beasts were at their Smother-era height. The overlapping vocals on tracks like opener ‘Baby Rattlesnake’ are just gorgeous, all swooping melody and flowing vibrato. There’s an unashamed clever-cleverness here which some may find off-putting, but which can also be incredibly refreshing, a tonic to some of the more lumpen lad bands who’ve emerged alongside the thrilling scenes listed above. In fact, that’s one quality which Team Picture do share with, say, Still House Plants or Jerskin Fendrix – it seems they have no problem with seeming a little try-hard or pretentious; in our particularly dour, self-conscious cultural landscape, that boldness is more than welcome.

It should be noted that Team Picture are hardly reinventing the wheel here; the aforementioned Wild Beasts definitely cast a shadow over proceedings, as do sophisticated art-pop forebears like The Blue Nile, Kate Bush, and Cocteau Twins. Occasionally, during the album’s slightly weaker second half, they do drift into aping the least interesting interpretations of those influences and arrive at a more meandering brand of dream-pop. To be honest, we don’t really need any more of that stuff at this point.

Yet the highs here are vertiginous, and more than make up for these infrequent misfires. Although Team Picture are by no means the only band who are leaning into maximalist aesthetics just now, there are few who use that kind of all-out approach in the service of raw beauty, as opposed to anxiety or experimentation, quite like this. An escapist gem.