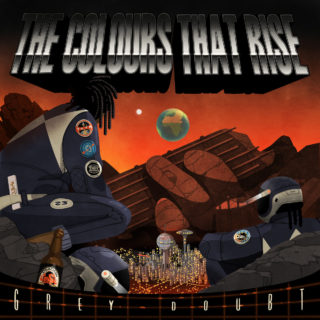 Three years ago, producer duo Simeon Jones and Nathanael Williams put out their first official release as The Colours That Rise, a cosmic-jazz four-track that hurtled towards a subject matter that, in 2017, looked like quite an underwhelming maiden voyage in time-travel: the year 2020. Vindicated though the once-reserved futurists may now be, the 2020 EP was a release that locked them firmly as ones-to-watch within the well-documented burgeoning London jazz world. Future sounds from experimental electronic to ambient and dancefloor were the bookends for an amalgam of nu-jazz and old funk, bounding three years forward and forty years back with musical ease. A record deal with Peckham mainstays Rhythm Section International later, and their debut full-length is enough to justify the excitement.

Grey Doubt is a “secret history” about black people who live on Mars. “This is a documentary,” opening track ‘Red Dawn’ says sincerely, “about black people living on UFOs… extraterrestrials that actually was black.” Whether TCTR are simple conspiracy theorists or peddlers of a cosmic truth one rung or two up from Murdoch’s most honest publication, what follows is something that cuts out the equanimity from the basement jazz club. Easy-access dub and celestial jazz seep through the live instrumentation and analogue synths, whilst chromatic sax riffs and breakbeat percussion glare with a neon shimmer more akin to Roy Ayers than Charlie Parker. Whiskey and bitters are furloughed for tequila, while Jones and Williams sit above their new civilisation with space suits and jetpacks.

As with all good documentaries, Grey Doubt thrives when other voices become involved. Features from London’s leading lights Yussef Dayes and Mansur Brown morph ‘Home Time’ into meditative funk, extended through the downtempo Balearic mantra of ‘Opactity’ and pulsing ‘Hyper Lace’. Vocalists Andrew Ashong and Yazmin Lacey are some of the real highlights; gospel-tinged ‘The Juice’ leads the way for degraded Madlib beats, wiry, fuzzed-out funk, ending with uncannily soothing soundscapes of ‘Atmosphere’, into a collaborative dimension where we shouldn’t really be calling this jazz anymore. Playing with reality’s fabric through half-truths and post-truths, TCTR’s Grey Doubt is an afrofuturist wake-up, on which even a 48-minute journey to Mars doesn’t feel too out of this world.

The Colours That Rise