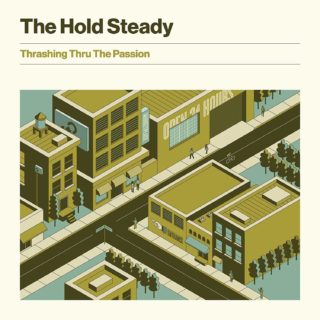 The Hold Steady’s seventh album is a record that combines five previously unheard tracks with five that have been digitally released over the past three years. It’s largely disappointing, although lyrically solid, as Craig Finn’s charismatic vocals pair perfectly with his rambling, narrated lyrics. But you were probably expecting that.

Lead single ‘Denver Haircut’, the record’s opener, tells a curious story: “He shaved his head at the airport/ In a bar at the end of the concourse/ He said you’re kind of catching me at a transitional time/ I’m a bright light burning into a dark horse.” It’s probably the highlight, with the subsequent songs sadly failing to maintain momentum.

Thrashing Thru The Passion is quite an accurate description of the music – its overuse of lashing guitars and heavy drums does take away from the intelligence and intrigue of the lyrics, and the general lack of dynamic variation means that the songs are basically indistinguishable from one another.

As is often the case with this learned bar band, the instrumentation is adventurous and the band is clearly made up of musicians more virtuosic than rock’n’roll often allows for, but Thrashing Thru The Passion is generally too busy to sound cohesive and often feels somewhat cheesy and contrived, from piano glissandos to over-the-top brass fanfares.

It’s difficult to imagine what mood this music could fit with – it is at best boring, at worst a bit annoying. The overall effect is generic, slightly dated sounding rock which sadly doesn’t live up to The Hold Steady’s past acclaim.