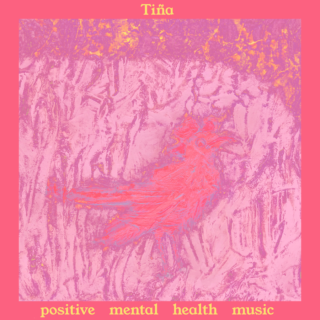 In a world without gigs, listening to Tiña is like peering through the lens of a virtual reality headset. A captivating live act and an ingrained staple inside South London’s indie Mecca, the Brixton Windmill, the band’s intimate mix of psychedelic keys and analogue-recorded guitars act as a sensory portal to times jammed inside sticky basement venues, overspilling plastic pint cups clenched tightly in hand.

Being a significant milestone for both band and label – Positive Mental Health Music arrives as the first full-length release to come out of Dan Carey’s Speedy Wunderground – Josh Loftin’s signature fluorescent pink cowboy-hatted getup is emblematic of his band’s eccentric outlook. As his lyrics portray him working through a mental breakdown, his nasal, sometimes childlike vocal offers a poetic and self-mocking account of his own personal struggles with anxiety and depression.

Detailing images of “dicks in the sky, vaginas in my mind” (‘I Feel Fine’), Loftin addresses his issues with considerable levity. On ‘Closest Shave’, between the sad snapshots of youth and abstract narration, he and his bandmates unanimously howl at the moon like a pack of wolves united in solidarity. Making no secret of his struggles facing adulthood, ‘Rosalina’’s wistful melancholy eventually boils over a precipice of despair on ‘It’s No Use’. The cloud eventually lifts on final track ‘People’ to reveal a new era of clarity and togetherness