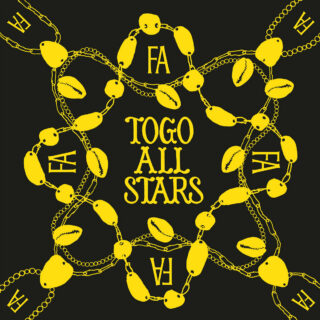 Cyclical, inclusive and insistent, this is an impressively purposeful, well-realised record from Lomé collective Togo All Stars. The promotional material for the album nods towards the band’s geographical and cultural proximity to the Afrobeat and highlife scenes for which this region of West Africa is perhaps best known, and those influences are absolutely audible, the rhythmic precision of the former melding expertly with the slippery harmonics of the latter; but as that material also notes, this isn’t supposed to be a mere pastiche or tribute.

This multigenerational project – singer Aguey Cudjoe has been active since the 1970s and is now accompanied by players young enough to be his children – is explicitly designed to learn from its stylistic forebears but push towards something new; on FA, Togo All Stars perhaps don’t find themselves on entirely untilled soil, but certainly combine familiar textures in novel, exploratory ways. The arrangements are rich and joyous, the rhythmic collages incredibly complex but never alienating or disorientated, the horn and guitar sweeps stately and fluent. The cumulative effect has as much in common with the cosmic groove of Funkadelic or Miles Davis’ fusion era as Togo All Stars’ closer geographical neighbours; FA is an adventurous, wholly contemporary record from a group who, at their most fluid, sound capable of anything.