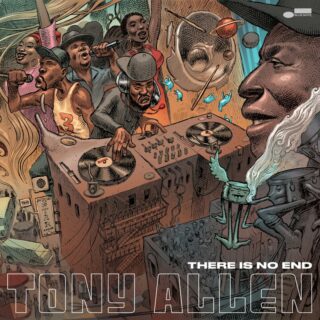 Tony Allen’s legacy is first and foremost as one of the pioneers of afrobeat, his polyrhythmic drumming the heartbeat of Fela Kuti’s Africa 70. An effortlessly novel fusion of jazz, highlife and funk, his performances behind the drums on those afrobeat records are eternal and influential, but what people often overlook is that after he left Kuti’s band and Africa in 1979, Allen never rested on his laurels. His fingerprints are all over modern music. So it is fitting that on the anniversary of his passing last year, the hip hop-inflected There is No End arrives, collating his final collaborations with the next generation of rappers.

This isn’t the first time we’ve heard his drumming paired with rap, but this is the first example of a whole hip hop album with Allen’s drums as the exoskeleton. The genesis of There is No End came after Allen spent hours playing along with his own drum compositions to songs in the rap canon with producer Vincent Taeger. It features rappers from across the world, his singular playing paired with innovative voices like Danny Brown, Sampa the Great and Skepta.

Twelve songs see Allen’s drumming at the very centre while different personalities orbit. On ‘Stumbling Down’ with Sampa the Great, his playing is terse and entwined with jarring synth-bass stabs, whilst his performance is far looser with instrumental noodling channelling West Coast heat on the album high of ‘Rich Black’, which features the brilliant Koreatown Oddity. On this extremely fitting elegy Allen’s drumming explores new realms with the same lively vigour that he showed fifty years ago.