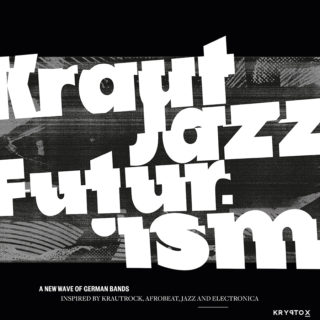 Titles are important, particularly with compilation albums, and there are several ways you can do them. There’s the scene-setter, like Warp’s classic Artificial Intelligence series, which frames the album’s contents; there’s the title-as-advert, where the voice of the enthusiastic compiler is present when you encounter the record, shouting Now That’s What I Call Music at you, or, in the case of last year’s excellent London jazz comp, We Out Here; and then there’s the Ronseal format – Numero Group’s Eccentric Soul series, for example, compiling soul music that’s somewhat eccentric in nature.

Apparently opting for the third method, Kraut Jazz Futurism hints that it might contain some futuristic jazz from Germany, and indeed, a handful of the tracks here fulfil that brief perfectly. (Before going any further, incidentally, is it definitely still okay in 2019 to describe music from Germany as “kraut” when, only a few weeks before this album is released, Vote Leave is being forced to apologise for using the same word as a xenophobic slur? After all, it would be a bit weird to call a compilation featuring Etienne De Crecy and Laurent Garnier Frog House, and plenty of the original practitioners of krautrock have publicly rejected the term. Then again, this is a record featuring German nationals – or allies thereof – and compiled by German national Mathias Modica, who can obviously call himself and his compatriots whatever he likes in the spirit of solidarity or affection. Anyway, back to the record itself.)

So it’s perhaps no surprise, then, that the tracks here that have three ticks – German, futuristic, and jazzy – are also the most appealing. Topping the pops is C.A.R.’s ‘Dick Schaffrath’, all sinewy synth tones and super-dry drums, with a bracingly cold, single-chorded sense of tunnel vision, its experiments with texture falling just the right side of the line that separates the accessible from the impenetrable, and its vast swathes of space creating an addictive sense of sci-fi void. That rejection of flashiness while maintaining the jazz spirit of improvisation and adventure within musical form is also nicely realised in Torben Unit’s ‘Free’, where modal harmonic weirdness, polyrhythmic manipulation and seductively alien atmosphere combine to excuse the slightly whiffy voiceover (“Show me a piece of your mind!”) at the beginning. Both Niklas Wandt’s and Keope’s appearances, too, remind us rather elegantly that jazz needn’t be a noodle-fest, and that efficiency and economy, even in contexts as free as percussion jams (the former) and unplanned synth workouts (the latter), are still as musically powerful as maximalist virtuosity.

Elsewhere, though, things are a little more hit and miss. Salomea’s ‘Magnolia Tree’ feels emblematic of much of the compilation, in which instruments are expertly played and recorded, but any flecks of soulfulness or human emotion feel ersatz at best, the players more concerned with showing off their chops than pouring out their hearts. Ditto JJ Whitefield’s ‘14/08’ (what’s with jazzers naming their tracks after their non-standard time signatures?) where the worst cliches about German creativity – cold, clinical fetishisation of technicality over passion – begin to bubble up. When this tendency restricts itself to brief mood music – the Arabian scales and film-soundtrack vibe of Shake Stew, for example, or the delicious groove on Karl Hector’s ‘Orange Man’ – the precision bite covers any lingering smugness; when it’s drawn out over the 12 minutes of the Andromeda Mega Express Orchestra, however, the relentless presentation of high expertise quickly dulls the senses.

At least these are clearly jazz-inspired, though, even if they lack much in the way of futurism. Other tracks, by contrast, appear to have been included simply on account of their Germanness, not that that’s necessarily a bad thing: Stimming/Lambert’s piano deconstructed through studio trickery and weed smoke, and Sissi Rada’s combination of saxes with dusty grooves of old soul records both evoke Massive Attack on the happy pills, and a pair of fairly straight-up indie numbers, too – the dream-pop of Oracles, and David Nesselhauf’s afrobeaty post-punk – are enjoyable, even if they feel like they’re at the wrong party.

Of course, eclecticism is the meat and drink of every good Spotify playlist, but within a conceptualised compilation such meandering leaves Kraut Jazz Futurism feeling a little lost. On the one hand, there’s something here for everyone (even those not really into jazz or futuristic-sounding music), and in that way it’s an excellent sampler record, a gateway to somewhere else. As a standalone piece of work, however, it falls foul of a title that’s writing cheques its contents just can’t cash. For all its appeal to Ronseal transparency, Kraut Jazz Futurism doesn’t really do what it says on the tin.

Think there's nothing new under the sun? This compilation from the Tehran scene proves you wrong