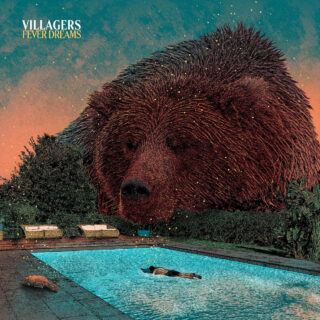 “When your blood is pumping and it’s all or nothing / You get a sense of something bigger than you,” Villagers mastermind Conor O’Brien croaks through the sole lyric on Fever Dreams’ brief, febrile opener ‘Something Bigger’. It might seem a bit melodramatic – we’re all guilty of letting our existential crises run away with us, especially given the backdrop of the last eighteen months – but really it serves as a pithy conspectus of the album as a whole.

Pinning together a rich labyrinth of vulnerable charm, blistering instrumentals and eerie pop sensibilities, Villagers’ fifth studio album seesaws between nightmarish and euphoric in a beat. Carving out a dexterous paradox of illusion and reality, Fever Dreams really is ‘something bigger’ – something fuller, more refined and more accomplished – than O’Brien has attempted before.

Ever adept at tapping into the moment – 2018 release The Art of Pretending To Swim artfully paid homage to the dance-driven electronica that was in vogue at the time – tracks like ‘Circles In The Firing Line’ and ‘Restless Endeavour’ aggrandise the current frenzied noise-rock trend. Reneging on some of the softer sounds O’Brien is used to, the latter sees trance-like vocals and floaty keys cascade into a painstaking mesh of fidgety instrumentals as urgent saxophone scrawls jostle for attention amongst harsh drum beats and an eerily abrupt ending.

In contrast, the likes of ‘Full Faith In Providence’ and ‘Momentarily’ deconstruct some of these complexities. Slightly more stripped back – but no less compelling – these moments of calm feel nonchalant and gauzy in a quintessentially Villagers way.

‘The First Day’ drags us in a different direction altogether. Showcasing Villagers’ range, it’s one of the album’s fuller tracks as wonky, reverb-drenched and electronic-tinged instrumentation descends into a dazzling concoction of lavish, all-consuming percussion. ‘Fever Dreams’ is just as elusive: O’Brien’s vocals take on an ominous quality as they meddle against an offbeat, artificial soundscape.

The world O’Brien has methodically crafted on Fever Dreams is a weird one. It’s unsettling at a time when we might quite like to be reassured, and it offers out a warm embrace only once we’ve got used to its foreboding, impetuous landscape. It’s well-executed and well-timed, ambitious and meticulously polished yet more effortless, organic and free-flowing than ever.