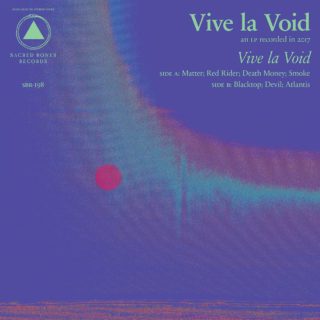 We’ve gotten to know Sanae Yamada as one half of psychedelia power couple Moon Duo, standing behind her synths shaping, together with her partner Ripley Johnson of Wooden Shjips, strong waves of hammering, psychotropic kraut sounds. Now, the songwriter and instrumentalist is debuting with her solo project, Vive la Void.

Her first album is inspired by the constant motion of her touring life as a working musician, and the subsequent absence of a permanent base. Rather than exploring the restlessness and the frantic effects of such a constant deployment of the self, Yamada chooses here to focus on memory and meditation, creating musical spaces that allow the mind to spread and find some sort of cosmic conscience.

The atmosphere is dilated and immersive in the 7 tracks of the record, from the opening ‘Matter’, which, despite its concrete title, loops around a modular structure whose repetition sounds like a meditative “Om” although is robotically delivered by some machine force. When Yamada’s voice enters in the songwriting, subtle and metallic, as in ‘Red Rider’ and ‘Devil’, it’s like hearing an interplanetary whisper guiding this contemplative introspection, adding to the anti-gravitational floating of the music. Even when the tempo speeds up, as in ‘Death Money’ (the most Moon Duo of all the tracks here), or when the mood gets darker, like in ‘Blacktop’, this sense of digital enlightenment isn’t lost.

There’s a well outlined red dot among the purple and green shades of ‘Vive la Void’’s album cover, like some rediscovered awareness of a soul that hovered on an electric self insight, regaining its solid shape after 38 minutes of empyrean loss.