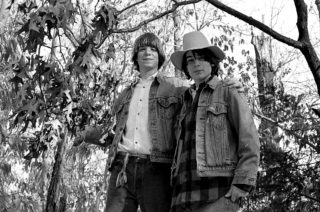 He now sports a bushy iconic beard, but back then Ripley was out in the Connecticut woods with his mates experimenting with psychedelics

This photo is from 1988. We’re in Wallingford, the small town in Connecticut where I grew up. I’m with my friend Josh (on the left), my high school buddy. Back then, with our friends, we would hang out in the woods and the farm fields all the time. We could do whatever we wanted, basically. That was probably our sophomore year, 10th grade. After freshman year you would find your friends and your clique. Ours was the bohemian, hippy thing… people who were into taking drugs, listening to psychedelic music.

The Neil Young look was also the New England ’80s look in a way. I still dress the same way as I did when I was in high school. Flannel shirts, jeans or corduroy pants and a denim jacket. The hat was not mine. That was very common back then – part of Neil’s appeal to a lot of people in America is that he looks like a regular guy and he drives old trucks.

I suspect we’re high as kites in this photo. We’re probably tripping. When I look at it I have really fond memories of around that time.

I’m curious to what we were listening to at the time because almost certainly there’s a boombox just out of frame. That’s the funny thing, we would go out in the woods but we weren’t really enjoying the quiet of nature. We’d crank Jimi Hendrix and have a big party.

If we had any weed we would smoke it, if we had cigarettes we’d smoke them. If we had psychedelics we would do those on the weekend. We’d always return home. It was never very far; it was just on the edge of the school campus. No adults would really go out into the woods, so we had it to ourselves and we could do whatever we wanted without getting caught. We’d have our own sort of Summer of Love experience but just amongst friends hanging out in the woods climbing trees. There wasn’t really anything going on in the town itself.

I’ve always been kind of shy, but at that age I was introspective but also very curious about the outer world. You reach a certain age where you start reading interesting books, start listening to music and being exposed to different art. Also, at a certain point I think it felt like you just wanted to get high school over so you could get the fuck out of there. A lot of what we did at high school, me and my friends, was about escapism.

I was pretty heavy into a classic rock phase at this time. Wallingford had one record store, which was called Merle’s Record Rack. It was not cutting edge. My exposure was pretty limited in that sense. My friends and I were really obsessed with The Rolling Stones and all the ’60s stuff. Jimi Hendrix and the Velvet Underground. Neil Young was a huge one. And cassette trading. My friend Jamie had about a thousand Neil Young concerts that he’d recorded or traded with people – we just had an endless supply of bootlegs.

I wasn’t writing any songs at this point but I was playing guitar. We had a band that did all covers. A lot of Velvet Underground, some Stones and Grateful Dead – they were another big one. Neil Young, The Band… we even did a Ronnie Wood song, which was pretty hilarious. Most days we would rehearse in an old gym at the school.

I actually just tossed out all my school reports but when I looked back through them a lot of it was ‘you could do better’. That’s the overall theme of my school career. I could do better if I tried harder. I did the bare minimum to get by. I never thought I’d get a real job. I wanted to be a truck driver. It was very romantic. I didn’t have any thoughts of applying any of the things I was learning at school to a job, but I loved art and literature classes. Those were my loves.

My biggest idol is Keith Richards so it’s not a great role model for a teenager in a practical sense, because it leads to a lot of partying and drinking. Maybe not the best thing for a 16-year-old!

I just remember this sense of freedom and abandon that we could get when we combined the music, the nature and the drugs, to some extent. We would really get pretty far out of our minds… and then we would come back, do what we had to do at school, and then we would go do that again. It was just opening our minds to this possibility of a different way of life. We wanted to be rock ‘n’ roll stars; we wanted to be in the Stones. We modelled our free time on that. This sounds really stupid I know but it obviously had an impact on my life.