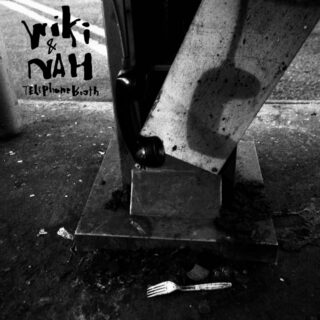 Telephonebooth is the third album from rapper Wiki since the dissolution of Ratking, and it sees the New Yorker develop his idiosyncratic style further from the path well-travelled. Philly-born Antwerp-based maverick NAH added a bit of production on 2019’s Oofie, but here provides a 22-minute skirmish of gravelly industrial beats, etching his gritty hallmarks deep into its grooves. Telephonebooth sees Wiki place himself even further leftfield than ever before, as he eschews the big name features of his past few releases in favour of a concise and focused experimental record.

After the world was thrown outta joint last March, NAH started crafting an album of beats for Wiki’s rambunctious flow, nasal and distinctive. Half skewed industrial coldscapes, half DIY psychedelia, NAH delivered a helluva concoction. On ‘Hip-Hop’, a vocal sample is kicked out of shape and pierced with a terse coldwave bassline, whilst the rapper bursts through with a particularly dense verse, tying even himself up in knots as his lines encircle the beat like a cast of ravenous vultures.

On record high point ‘Sh*t’n Me’, NAH contorts a glorious sax sample around Wiki’s lyrical zip; brass cacophony forced into a boom-bap shape by a juddering delay. Meanwhile, opener ‘Life Like’ sees Wiki musing: “Everything I write important / Maybe not, might be boring”, through a similarly stark brass bongcloud – in this, a real chemistry is evident between rapper and beatsmith, their styles complementing each other perfectly. Wiki and NAH are a really novel duo, the rapper more at home than he’s ever been in amongst the experimental miasma. Telephonebooth is a punchy little album that makes quite the impact. Five years on from the breakup of Ratking, Wiki sounds as though more than ever he is in the right place – the weirder the music, the more he thrives. Confident in his nasal flows, and joined by a collaborator intuitively able to get the best out of him through frequent experimentation, the New Yorker is at his absolute best throughout Telephonebooth.