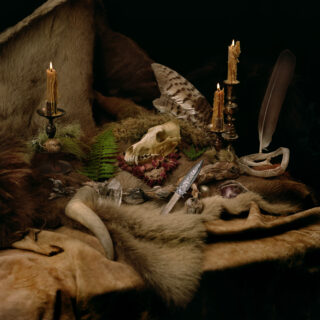 Wolves in the Throne Room have certainly been on one hell of a journey. Since forming in 2003 the band have been on a quest to capture the energies of their home in the Pacific Northwest and take them elsewhere; but now, the band are returning sonically, physically and spiritually to the forests where it all began.

Famously, Wolves in the Throne Room formed in a tumbledown log cabin, but Primordial Arcana is the band’s first record to be recorded entirely at their Owl Lodge Studio, with ​​brothers Aaron and Nathan Weaver alongside guitarist Kody Keyworth handling all of the production, recording, mixing and mastering on their own. As you’d expect, the result is the most DIY-sounding record Wolves have made for years. For the first time in years, the band seem more concerned with mortal matters than transcending into more lofty, atmospheric realms. Opener ‘Mountain Magick’ sets the tone with an almost folksy guitar melody building ever skywards into a triumphant monolith, while tracks like ‘Masters of Rain’ and ‘Storm’ nod towards early inspirations of the band such as Slayer and Bolt Thrower.

It’s a weird comparison, I know, but in a way Primordial Arcana kind of reminds me of Taylor Swift’s Folklore. Yes, both records are clearly radically different in terms of tone and structure, but at their hearts both are products of artists attempting to peel away artifice and mythology and find something truly genuine underneath. I don’t think Wolves In The Throne Room have ever sounded more human.

Wolves In The Throne Room