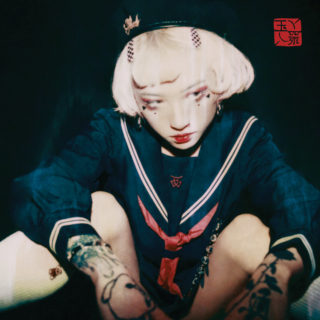 On her debut album, yeule rings in the apocalypse with synths and a Launchpad. Conjuring a dark spectre of the future, the London-via-Singapore producer disappears into gothic pop reveries, blurring the line between illusion and reality.

On ‘Nuclear War Post IV’ she deftly evokes a barren dystopia with ambient sounds of thunder and gusty winds, before the nightmarish ‘Veil of Darkness’ takes that carefully crafted atmosphere and blows it up. Soft piano keys accelerate into a blast of discordant, thoroughly unpleasant electronics that is far scarier than any mushroom cloud.

Pulling away from visions of death and destruction, yeule’s thoughts turn to fantasy. “I wanna leave the world I was left in,” she sings over a twinkling synth and glitchy vocal loops on ‘Pixel Affection’, asking for her heart to be poured “into simulation”. Escaping into this digital universe gives rise to some of Serotonin II’s most human moments. ‘Eva’ is a beautiful, blunt meditation on revealing long-hidden scars, scored by cascading electronics and spacey pads. “When I’m with you/ These demons in my head ain’t got no place to go,” she sings, for a moment forgetting her personal apocalypse.

Rejecting reality and drifting further into cyber simulations, she finds herself in purgatory. “There was a time when she could tell/ The difference between dream and life,” she laments on solemn album highlight ‘Pocky Boy’. The sound of a gun cocking sets off a stomping beat as she repeats the words “Finally, finally die”, her vocals drifting through pulsating electronics like a ghost in the machine.