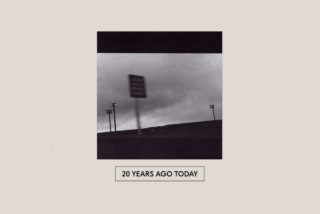 It’s difficult to imagine how a recording career could open with more dread. “The car’s on fire, and there’s no driver at the wheel,” begins the growling, downbeat narration on the first track of Godspeed You! Black Emperor’s debut, before going on to lay out an arid, apocalyptic picture that, eerily, foreshadows the 9/11 attacks. Meanwhile, an ominous drone throbs beneath. What follows is mournful and discordant, nostalgic and poignant, doomy yet also disconcertingly beautiful, and, twenty years on, resembles a sort of imperfect manifesto to purity and artistic accountability.

‘F♯ A♯ ∞’ is also perhaps the most politically antagonistic record to be released in 1997 which, given that it’s largely instrumental, is a huge testament to Godspeed’s communicative power: sure, the album’s field recordings of intercepted police radio and paranoid vox pops, and its sleeve, full of fateful prognostications and diagrams, make explicit the band’s distaste for government recklessness and irresponsible power. But the music that surrounds it is equally expressive of Godspeed’s progressive politics, of a belief in the strength of a democratic collective: there is no one lead instrument on ‘F♯ A♯ ∞’, themes are shared around and duties equally distributed, and intensity is derived not from sudden shifts in volume or showy circus tricks from one player, but from density – a sort of “we shall not be moved” resistance in musical form – invoked by every player pulling in the same direction, a gesture that renders the band less a group of musicians, and more a movement. On the handful of occasions across ‘F♯ A♯ ∞’ when the 15-plus musicians move as one and at full throttle, it becomes clear that, like a successful political party, Godspeed’s greatest asset is their unity.

Even ‘F♯ A♯ ∞’’s production feels like a statement of dissent: despite the majority of the album falling between mezzo-piano and mezzo-forte, the dynamic range is nonetheless huge, and consequently wonderfully confrontational (not to mention particularly arresting today, after twenty years of loudness wars). Because of it, the eruptions become more violent or passionate, the broodings more sinister or delicate, and the album as a whole becomes one that commands attention in the same way as a charismatic protest-leader.

Indeed, the most impressive thing about the album isn’t its louds and quiets – the standard calling card of post-rock that has become something of a cliche, and which ‘F♯ A♯ ∞’’s actually largely eschews – but the record’s tone. There are long periods of abstract swooping and shimmering, and entire sections dedicated to the examination of texture, where ambience and grain take precedence over melody. These sections are by far the most intriguing, and accordingly when Godspeed do allow a tune to percolate and build, it comes from a firm foundation. In turn, that inspires a confidence that mutates almost into a sort of devotion, both in the band and the listener.

On the tenth anniversary of ‘F♯ A♯ ∞’’s release, the global financial markets went into freefall, triggering the biggest economic crisis since the Great Depression. On its twentieth, a corrupt, bellicose US president appears inches from nuclear war with a rogue state that’s ruthlessly killing its own citizens. In 1997, however, there was relative global stability, and Francis Fukuyama’s prophecy from five years earlier that we had witnessed The End of History (“the end point of mankind’s ideological evolution”, he posited) appeared to be holding true. In that context, ‘F♯ A♯ ∞’’s eschatological diatribes and musical paeans to the virtues of direct democracy can be interpreted as a reaction against the complacency and decadence of the 90s. But one of the reasons the album endures today is that those same warnings ring far more threateningly true in 2017, and, one senses, may well continue to do so in the future.

But that’s not to say that ‘F♯ A♯ ∞’ is depressing. The album’s final piece seeks to offer hope: “The preacherman says the end of the world is coming, but I don’t go by what he says,” goes a field recording at the start, before the movement builds towards an enormous, rather euphoric major chord 15 minutes later. It leaves a taste of optimism and empowerment, a sense that despite the world’s many troubles, it’s not time to give up quite yet. That final ring of hope – demonstrably grown from the terror of the album’s opening – is perhaps the record’s greatest achievement: “The future is still bleak, uncertain and beautiful”, reads a letter from the band within the album’s packaging. Perhaps there’s not as much to dread as first appears.