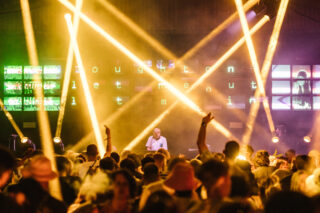 Houghton returns, and it's as good as ever – but in a context of economic and social crisis, it's hard not to worry about the increasingly prohibitive cost of UK dance music culture

It’s no secret that the pandemic was tough on nightlife. This summer was awash with headlines about nightclub closures in the UK: one in five establishments have closed their doors for good, with the government’s consistent undervaluing of the arts scene sounding the financial death knell to so many. Notably in the capital, Southwark Council recently announced that Printworks – Rotherhithe’s 6,000-capacity venue and stalwart of the electronic music scene since 2017 – is set to close, too, despite a 10,000-signature strong petition being launched in protest.

Printworks is now to be redeveloped as offices and shops as part of the ‘multi-billion-pound Canada Water masterplan’ – though depressingly, this wasn’t a COVID closure, but part of the plan all along. In the report by council officers, ‘the events use was initiated as a short-term interim use… it was never intended to be a permanent use of the site’. If I were more cynical, I’d say that developers used the club to put the area on the map for a certain demographic of people, propping up the area with life and noise and cash until the new flats are ready: at which point, if they can afford it, they might even be prepared to pay top dollar for a new-build there. Maybe.

There’s something about this that feels oddly apt for the dance music scene today, as we emerge from a pandemic that made proximity to others so dangerous; that made the intimate, anonymous thrum of other bodies in a crowded room that’s so vital to the late-night economy, actually illegal, coupled with a government that refused to acknowledge its worth. Adding to this sense of the uncanny this year was the news that Peggy Gou – first ever Korean DJ to play Berghain, merch maven, and once herself a feature of the Printworks stage – partnered with Magnum (yes, from the ice-creams) and Kylie Minogue (you know the one) to remix Minogue’s 2001 hit, ‘Can’t Get You Out of My Head’. There’s no getting around the fact that electronic music is Popular Now, Actually.

This is the landscape into which Houghton Festival returned after a three-year hiatus. Launched in 2017 by Craig Richards and his team, Houghton quickly established itself as a major player in the festival circuit. After making a name for itself through unwavering commitment to sound quality, a line-up comprising some of the biggest names in electronic music, and the option to dance (should you want to) for a full 24 hours a day, expectations were high. This year, with a capacity of around 12,000 (scaled up from 2017’s 5,000), there was a sense in the air of release: years of anticipation finally coming to an end.

It’s a beautiful space to hold a party. The grounds of Norfolk’s Houghton Hall estate, coupled with the Houghton team’s light installations and design flair, make for a gorgeous backdrop to the weekend. The sense of artistry continues in the art tours that the festival puts on, with delightfully kitsch, toy-like trains running from the festival site to shuttle us to see works by sculptors from Turner Prize-winning Rachel Whiteread, to a truly showstopping James Turrell piece. When we asked who owned this place, and how it was that they let a festival take over the grounds for a weekend, we were told that ‘Lord Cholmondeley is really committed to art’. Seshlord Cholmondeley, I thought, and laughed.

Many of the stages are set around the central lake, totally still and glinting in the strangely relentless mid-August heat (looking back at photos from the weekend, the grass was so parched, the sunlight so strong, that a friend asked if the festival had been held in Croatia). On Friday, staff circled the picnic tables that dotted the festival site with cold, wet towels for those taking refuge in the shade, which, in the 36-degree heat, felt like a gift from God himself.

2019’s line-up was run again this year, with highlights including Binh’s skilfully curated tech house set under the blissful shade of the woods at the ‘secret’ Terminus stage; Hunee’s eclectic, transcendent selections reaching through the unprecedented dust that veiled the Pavilion; Shanti Celeste’s expansive house beats lilting over the Derren Smart stage in Saturday’s early evening sun. Three years later, the line-up remained impressive, with sets from such heavyweights as Helena Hauff, Palms Trax, and Horse Meat Disco. The appetite for some of the acts reached fervour, and crowd control broke down into hours-long queues for Pearson Sound at the Quarry, but given the spread of the fifteen stages, there were always other places to go.

A general admission ticket to Houghton this year cost £230 (plus booking fee). This isn’t out of line with other festivals, and especially one with such attention to detail in its production; a ticket for this year’s Field Day, an electronic music festival held for one day in London’s Victoria Park, sets you back £90 (+bf); a day at Maiden Voyage Festival sees you parting with £60 (+bf); you can even spend £151 on a ‘Black Pass’ ticket for Peggy Gou’s Pleasure Gardens in North London’s Finsbury Park, which gives you queue jump, four (four!) drinks tokens, and access to luxury toilets and an access to an area behind the stage ‘where you can dance directly behind the DJ with a view over the crowd’.

There’s something here that gives me pause: whatever way you look at it, that’s a lot of money. So much of the aesthetics of rave culture were founded on the lawlessness of free parties, and dance music and politics are intrinsically linked: from the Thatcherite moral panic that met the nascent scene in the late 1980s, to the systematic underfunding of club/art spaces in austerity Britain, to the raves that sprang up in response to the government’s lockdown measures. The current trend towards commercialisation of electronic music, then, feels incongruous: different to the big money that’s always been behind rock shows, pop stars. To paraphrase Mark Fisher, the collective potential of the rave is at joyful odds with the ‘psychic privatisation’ of the neoliberal project. I wonder what he’d have made of the idea of someone who’s spent upwards of £150 to dance behind Peggy Gou on stage, separated from the crowd and on display.

Of course, it’s not like this everywhere. Unlicensed parties never really went away, and there are collectives working to return the rave scene to less commercial roots. For K-Punk is homage to Fisher’s body of work, a space for thinking and communing to extend beyond academic spaces, with accessibility being central to its ethos. Redtek, ‘London’s socialist soundsystem’, is also proudly political, with a night this summer spotlighting the cause-and-effect of capitalism and climate change with the slogan ‘the world isn’t dying, it’s being killed: and those that are killing it have names and addresses’.

None of this is to say that the more expensive events aren’t worth it, and it’s important to note that these tickets do routinely sell out. After all, putting on a good time, in this economy, can be costly. But in a day and age where you can’t move without being slapped with the threat of an even higher energy bill, partying and other perceived frivolities are often the first things to go: we revert to survival mode. In such times of threat, it’s worth looking beyond the glitzy marketing campaigns and VIP packages to nights that remember what once was – and what might be again.