Manc jazz eccentric may be a bit much for some, but the beauty of his playing is undeniable

You don’t need a rendition of Bright Eyes’ ‘Lua’ to tell you that the same things can look very different by night and day. As the 16th incandescent edition of End Of The Road festival splutters to a close, Sunday’s slothful small talk rarely slips into more than trading highlights with near strangers. And for those that saw it, seldom does a conversation end without mention of Manchester composer and saxophonist Alabaster DePlume, whose Saturday afternoon set of healing and rejuvenation in the dappled sunshine of the Garden Stage was only topped by the agitated delirium of his secret Tipi set in the early hours of Sunday morning.

Certain elements are constant between the two: DePlume (real name Gus Fairbairn) stands to the right of his band in bright purple skater gloves, cradling his saxophone at a 45-degree angle as if he were fixing it to an invisible wall. He leaps in celebration at the end of each song, knees wide for the landing, punching the air with his one free hand and staring out wistfully to those who signal back, somehow looking each of us in the eye simultaneously. It’s the same pep talk each time, congratulating his audience for existing, but its sincerity can’t be questioned: “Look at you! Living is hard. I think you’re all doing very well.” 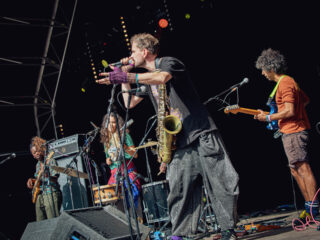 Fairbairn’s eccentricities feel all the more curious among the swathes of beautiful, melodic music that have characterised a lot of the weekend’s standout moments, but it’s not bravado. His band comprising Sarathy Korwar, Donna Thompson, Conrad Singh, Rosetta Carr and Metta Shiba showcase true virtuosity, from peacock fans doubling as maracas on ‘Song of the Foundling’ to instantaneous set list changes where they improvise unrehearsed material to Fairbairn’s on-the-spot instruction. Nothing here is played from a sheet, but played to a feeling – as naff as that is to write, it’s magnetic to witness.

The beatific self-reflections of ‘Don’t Forget You’re Precious’ (including one ecstatic sing-along of de facto chorus, “It’s fucking taschenrechner”) and gorgeous warbling saxophone of ‘Visit Croatia’ in the afternoon are swapped for ‘Be Nice To People’ and heavier ruminations from his work with Soccer96 by night, alongside a post-punk reading of grievances. Just as ‘I Was Going to Fight Fascism’ carries the same warnings as a ‘First They Came’ poem, the shouts of “Do you fucking want it?” at the end of ‘Buy It’ that would have invited an audience response earlier now hiss with a challenge in anger of apathy and inaction: “You want someone to blame? Let me get that for you.”

Both sets are dedicated to friend of the band, trumpeter and International Anthem label-mate, Jaimie Branch, who passed away last month; there’s an undeniable grief that permeates everything. From shared mourning and spiritual provision on Saturday to complete agony and anger by Sunday, he reaches out and ends with a broken but determined “Good luck.” It would be trite from another tongue, but even with his most caricatured feel-good interjection, these motivational platitudes sound life-affirming. 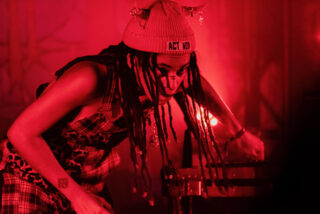