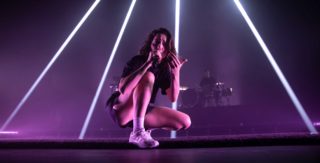 The French singer, actor and dancer discusses her spotlight performance at Les Trans 2018

Each year, Les Transmusicales hosts a spotlight show – a two-hour slot held on consecutive nights devoted to an artist making an impact. After past performances from the likes of Benjamin Clementine and Nakhane, this year, the new music festival based in Rennes opened its doors to the glistening multifaceted talent of Alöise Sauvage.

She’s just signed to Universal France and for the past two years, Sauvage has been developing her own visually accompanied take on French confessional hip-hop – and has even recently delved into a bit of film acting. Having spent a large part of her youth training in contemporary circus performance art, Sauvage’s talents don’t just lie parallel to one another, they often also interlink. This year at Les Trans she engineered a unique, never seen before performance; one that encapsulates both her talent as a musician, flair as a dancer and physical performer.

For the duration of the weekend (5-9 December 2019) her shows took place at the L’Aire Libre theatre, and as I arrive to greet her on the evening of her third performance, it’s clear she’s struck by (and perhaps a tad nervous about) the prospect of international attention. As we stumble around the other’s conversational language limitations, we discuss her music, blossoming acting career and what playing the spotlight show at Les Trans really means to her.

What were your first thoughts when you were invited to play the spotlight show at Les Trans?

Honestly, it was a shock. I was astonished because I was familiar with the people who’d played it before. People like Stromae, Jeanne Added, Nakhane, so many artists of a really high standard, some of which I listen to everyday. I like challenges and this was a great opportunity for me. Last year, it was just me, a microphone and a backing track so this really was next level stuff.

What was it like designing the choreography for the show?

It may surprise you, but when I’m moving or dancing, it’s pretty much total improvisation. I don’t choreograph anything, I just move into the correct space at the right time. I use the lighting and music to guide me.

You were a student at the Fratellini Academy, what was it like going to circus school?

It was certainly an adventure. Before I left conventional schooling, I was involved in a lot of extra curricular artistic activities. I did theatre, break dancing and played music so training in contemporary circus performance was always attractive to me. I was an all rounder so it was the place for me.

It was tough though because circus school is a very physically demanding place to be. At times, I felt lost and not in the right place because of how competitive it was, but the teachers and directors helped steer me towards my ambition to be a multi-skilled performer. 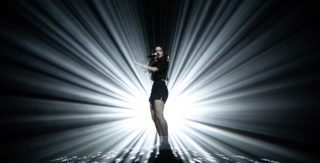 Which genre of music would you place yourself in?

I don’t think it’s a relevant question for me. There is obviously a certain hip-hop energy within me but I’m not just defined by that. Sure, my lyrics come before everything. Writing it very important to me. I don’t like to write about material things, I talk about the things that matter. But it’s a variety of styles: hip-hop, electro or new wave, maybe I’m something new.

Was combining your music with circus performance a natural process?

It was never my ambition to be a show off. Hey, look at me, I swinging from the ceiling! But because of my background, merging the two really felt like the obvious thing to do. I think it differentiates myself from the rest, and I like the idea that my body sings simultaneously to when I do. When it’s just you on stage, you have to present yourself in a way that’s interesting. In the future, I hope get more circus themes into my performances but I don’t want to forget the music. Sometimes I perform when dancing and movement is the primary output, but not when it comes to my music.

My French isn’t great, so what can you tell me about the lyrical content of your music?

My music is about my life. For every emotion that passes through my body, I like to throw it back up again in the form of music. I have to write down my feelings and let them out. Otherwise I’d go crazy. In my songs, I like to talk about love, especially in my new track. I write about freedom, the freedom of who and what you want to be. Also music about never giving up, I’ve been depressed in the past and I often talk about that.

How about the music you listen to in your spare time?

<Whipping out her smartphone, she’s now scrolling franticly through her Spotify playlists>

I like Jayden Smith, Amy Winehouse, Brockhampton, Rihanna… I LOVE Childish Gambino. Oui oui oui, he’s my favourite. I really like Benjamin Clementine too, he played the spotlight show at Les Trans not that long ago.

You’ve acted in films too. You were recently in 120 Beats Per Minute and you’ve been on set working on La Feurve which is due to be released next month. How have you been able to adapt to a career in acting?

Well, I’ve not really got a traditional background in film acting. When I was young, I was involved in a lot of amateur theatre groups and eventually at Frattelini Academy, I took some more professional acting classes but that really was it.

Has it been difficult to adapt your acting to a professional standard?

It’s definitely not been easy, but in the current world of French cinema, the new generation are coming through. There are a lot of new actors like me who haven’t come through in the traditional way. Directors like that at the moment. We are more natural and spontaneous in performance which in some ways is better than the more experienced and regimented ways of doing things.

I read in an earlier interview that you are (or at least were) sceptical of signing a major record deal. Do you still hold this opinion now?

In life, I have always been drawn to the ‘independent’ way of doing things. If I want to do something, I do it, and I’ll do it without bearing the constraints of others. About a year ago, I didn’t want to sign with anyone because I thought I could do everything alone. But things have changed, I do a lot and I need help. I often get stressed about doing things my way and only through the lens of my own vision. I work alongside a team that are constantly giving me ideas, but I might want to do something my way. We try to understand each other but they know what I can do, so I’m confident they will let me be free. I always want to be free.

Have you got any exciting releases on the horizon?

An EP for sure, I hope spring (2019) will be the time to get something out. As for a full-length album? Maybe after. It’s on my mind, but for now, I’m only focusing on the EP. I’m still relatively unknown and I need something to present myself.

When will you come to play in England?

It’s my dream. I had a proposition to come over a play a special performance next June but I’m not sure yet. I’d love to come over, it’s my dream to export what I do. But because I speak in French, maybe it’s more difficult. You can tell your friends in England that I’m ready if they are. 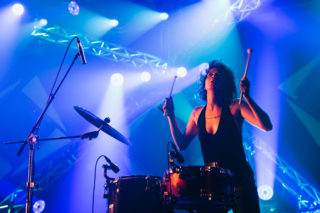 ‘Les Trans’ was among the first festivals to book Nirvana and Björk, almost 40 years in it’s still managing to get the best new music first